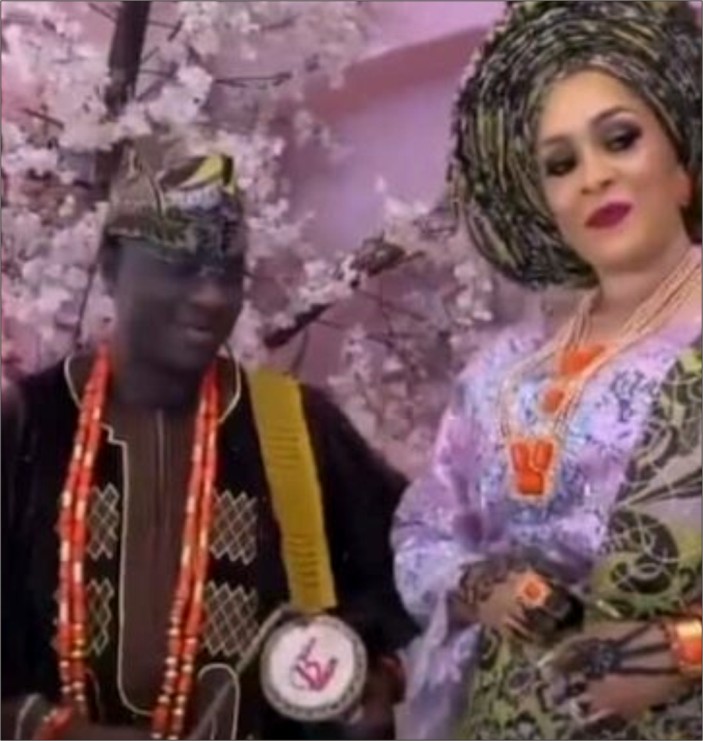 On Thursday, 18th of November, 2021, the ancient city of Abeokuta in Ogun State was set on fire, as the Maiyegun of Yorubaland, Alhaji Wasiu Ayinde, popularly known as K1, married an epitome of beauty, Emmanuella Ropo.

Even though it was planned to be a low key Engagement and Nikkai ceremony with only a few relatives and friends in attendance, the number of dignitaries that stormed the city, for the wedding tagged ot the “Wedding Of Year” was huge. That didn’t come as a surprise. Because K1 is hugely loved, take it or leave it. There are many fans, friends of K1 who will turn up for him, come what may. And that explains why the supposed low-key event now turned Wedding of the year. It’s the most talked about event as we speak, even on social media, K1’s wedding is still trending till this moment.

City People TV was the official media of the day, and the team made up of SUNDAY ADIGUN, NURUDEEN SALISU, SANNI ABDULRASHEED and SUNDAY ADERIYE covered the event and brings hot gists, gists that no one will tell you from the one-in-town party.

At the wedding, K1 and the bride made style statements. K1 looked so respledent in his well embroidered Agbada, made by Bashy Kuti, which he wore for Introduction segment and Mudi made his cloth for the Nikkai.

And the bride looked heavenly in her 2 outfits designed by @shoge-ef.

Alhaji Wasiu Ayinde Marshal’s wedding to his new wife Emmanuella Ropo took place at the prestigious OOPL in Abeokuta. Don’t get it twisted, it was the OOPL small reception centre, inside Obasanjo Presidential Library, not the big one that everyone is used to.

The hall is a mini-hall with just 500 guests capacity. The whole place was beautifully decorated with K1 and his wife’s beautiful images. Inside the hall; it was decorated with flowers, touch of pink and white colour. The lightning was super and blended with the decoration.

FINESSE DECOR DID THE MAGIC

It is no more news that Finesse decor is one of the finest event decorators many celebrities are now going for. Why? Because of their professional touch. She did the magic with the decoration and lightning and made the place suitable for kings and queens.

She actually turned the hall into paradise. Let’s not forget to tell you that Finesse also supplied the beautiful ushers for the event.

You need no one to tell you that Funmi Alatishe is good at what she does, The CEO of popular Shikins Events planned this event and you can see the touch of professionalism in everything. As at 11:30 am, for an event scheduled to start for 12 noon, everything was set and well organised. All the vendors were already on ground, even when guests were yet to arrive. Very organised and well-detailed.

The first set of guests that caught our attention were the men in white. Media guru, Mayor Akinpelu was the first to enter the hall, gorgeously dressed in complete White Agbada, followed by another media guru, Otunba Sesan Alabi of Goldmyne. Other men in their company were Otunba Are Wale Tawak Adeyemi, Otunba Olanrewaju Taiwo, Alhaji Chief Akanni Muhammed (LAMEX) and Alhaji Lateef Kehinde Bisala Akinsanya. These were also the group of men that followed K1 as his Groom’s men.

WHAT ABOUT LANRE ALFRED & CO?

Popular Alaga Iyawo anchored the engagement ceremony, supported by Alayo, Mrs. Lola Akintunde. They were so professional in what they did. No unnecessary waste of time. And they made the ceremony one of the best you can think of.

TRIUMPHANT ENTRY OF THE BRIDEGROOM

And the moment we have been waiting for came. The latest bridegroom, King Wasiu Ayinde came in with his entourage looking so dashing in his complete Agbada outfit. K1, in his humble self, took his time to acknowledge the presence of all his friends from one table to another before submitting himself to the Alaga Iyawo.

He was in the company of his friends and his children. Let’s not forget that Kcee as usual was the best man of the day. K1’s daughter, Hon. Idayat Mashal acted as the groom’s mum, while his son, Yomade Ayinde Marshal, acted as the groom’s dad. K1 was introduced to his in-laws as custom demands but was not allowed to prostrate. He was later ushered to his seat after taking pictures with them.

Many of K1’s children were present at the wedding, led by Hon. Idayat Marshal. They also invited their friends. Some of the children coordinated many things at the party. One can easily tell they are happy with the choice of their father.

AND THE BRIDE CAME IN

And it was time for the beautiful, gorgeous and elegant bride; Emmanuella Ropo, to come in. Her outfit made her the synosure of all eyes. You need no one to tell you how happy the bride was, it was all written all over her face. Emmanuella danced from her car, with some local beat (bata) dance-steps, to the podium.

It was a great day for the lovebirds. Even K1 was in his usual mood, you could see love written all over his face. Emmanuella was directed by the Alaga Iyawo as custom demands before she joined her husband.

Alhaji King Wasiu Ayinde gave her a ring and sealed it up with a lovely kiss and hug.

THEN IT WAS TIME FOR NIKKAI

The 2nd part of the ceremony started immediately after the engagement. The latest couple quickly dashed out to change their outfits after greeting and appreciating all the guests. When they returned back, 3 Muslim clerics were already seated to conduct the Nikkai ceremony. The couple was welcomed in another beautiful white outfit and the Alfas anchored the Nikkai proper.

OVER 50 BEAUTIFUL WOMEN DAZZLED IN ASO-EBI

Many beautiful women who are Emmanuella Ropo’s friends dazzled in the beautiful aso-ebi. The fabric caught our attention because it’s beautiful. The fabric was supplied by Jummy Exclusive Fabrics. It was imported from Switzerland. And trust beautiful women, they did justice to the fabric with different lovely styles and complimented it with jewelries (gold and diamonds).

Trust K1 with his relationship with monarchs, if not that the ceremony was a low key, the whole place would have been jam-packed with top monarchs. Nevertheless, few top monarchs were sighted, led by the fashionista Olu of Itori, Oba Abdulfatai Akorede Akamo and they were all very much on ground till the closing of the event.

Few of K1’s colleagues made it to the event. Alhaji Sule Alao Malaika was sighted since morning, standing solidly behind K1, Alhaji Sefiu Alao and Ere Asalatu were also sighted before the engagement ended, while Alhaji Wasiu Alabi Pasuma came later in the evening to show immense support for the king of Fuji music, their boss, King Wasiu Ayinde Marshal.

ALL THE VENDORS DID WELL

Enitem Ice & Drink, and X5 drink we in charge of cocktail, and chapman, Rennys Professional Caterers took care of the sumptuous meal. Shikins drinks were in-charge of the drinks, while Chop Master did well with the assorted small chops. What about Loretta Catering Service? They shone with their unique traditional outfit, you can easily recognise them in their kampala outfit.

And dessert table for cake and ice cream by Sinat Cakes did their best as well.