Oyegun was overrated, wants to destroy APC before leaving-Okorocha 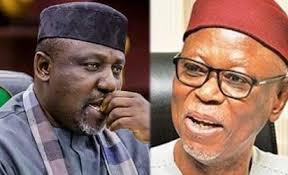 Ongoing bickering in the All Progressives Congress, APC, appears to be worsening as the Imo State Governor,RochasOkorocha, has taken a swipe at the National Chairman of the party, Chief John Odigie-Oyegun, saying he is overrated and that he plans to destroy the party because he is leaving.
This was contained in a statement titled ‘APC leaders over-rated John Oyegun’scapacity at the beginning’, which was made available yesterday by his Chief Press Secretary, Sam Onwuemeodo.
According to him, the way Oyegun pursued the issue of tenure elongation revealed his level of greed and selfishness, adding that he has taken the party backward by several kilometers to the extent that majority of the states are engulfed in crisis and division.
“With the manner thatOyegun has piloted the affairs of the All Progressives Congress, it is obvious that party leaders must have over-rated his capacity in allowing him to succeed Chief BisiAkande as the National Chairman of the party.
“Chief Oyegun has taken the party backward by several kilometres to the extent that today, there is no state that the party does not have crisis or faction.
“Again the way he pursued the issue of elongation also showed how selfish and greedy he is. He is not interested in the well-being or future of the party, but only interested in staying put as the national chairman. And that is why he is after anybody who opposed tenure elongation.
“The worst thing that would have happened to APC is to allow Chief Oyegun to continue as the national chairman. It would have been worse for the party. Chief Akande never tried to destroy the party because he was leaving as the pioneer chairman, but Oyegun wants to destroy the party because he is leaving. He is not patriotic.
“In the case of Imo, he disobeyed two court orders with regard to the congresses and the inauguration of strange elements as state officials of the party just to get at Governor Okorocha because of the issue of elongation. We have no option now than to ask our lawyers to press for his imprisonment and that of OsitaIzunaso and all those who were involved in the lawlessness.
“The only thing Chief Oyegun has achieved in his anger against Okorocha is encouraging elements with no electoral value like OsitaOkechukwu and those from Imo to be insulting the governor. These are people who cannot win their booths in an election,” part of the statement read.
It would be recalled that Oyegun, had in response to allegations leveled against him by the governor, advised him to take a self-appraisal of his government and dealings because many people are against him, especially in his state.