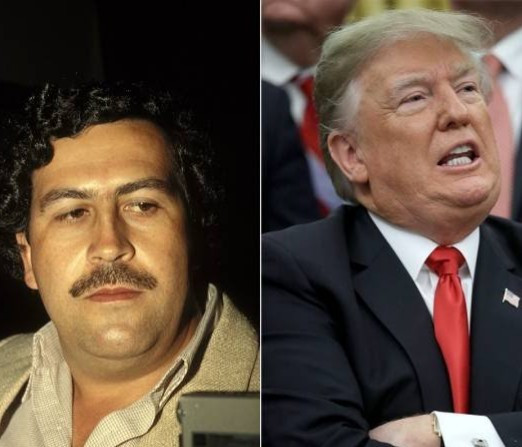 Roberto (El Osito) Escobar, the brother of the infamous late Colombian drug Lord Pablo Escobar, is raising money in an attempt to impeach the US president.

El Osito launched a GoFundMe campaign with the hopes of raising US$50 million in donations for his company Escobar Inc. But GoFundMe removed the page shortly after it was posted.

On the page, Escobar claimed to be “holding dirty secrets of President Trump, his family and associates.”

The appeal on his GoFundMe read:

Pablo Escobar is a South American, also known as ‘Latino,’ legendary hero, who helped millions of people in his home country of Colombia and surrounding countries.

With the strong leadership of his company Escobar Inc., founded by his brother Roberto Escobar, we will push hard to get Donald Trump impeached.

So far, everything Pablo and his family have done has become multi-billion-dollar successful ventures.

Global News spoke to Escobar about why he wants to take these steps to impeach Trump and he said:

“His discrimination of the Latino American people. We are some of the hardest-working people in the world. Trump is 100-per-cent corrupt and colluding with foreign governments. Trump is like a Chihuahua dog — small and cute but doesn’t know how to bite. I am good at biting,”

Escobar also told Global News that he believes the GoFundMe campaign will not only help the United States but the rest of the world as well.

“It will help the world. I am going to eliminate Trump from power. I will do it. My brother Pablo killed hundreds of judges and thousands of policemen. But this time we will do it the legal way, peacefully.”

He continued: “I know there is enough dirt on this guy. If we pay the right connections, they will come forward and testify in Congress and co-operate with Robert Mueller.”

When asked if he wants people from all over the world to donate, Escobar said: “Yes. The goal is that anyone in the world that feels that Trump should be removed goes and donates right now to the campaign.”

He continued: “Once we raise the $50 million, we believe we have an incredibly high chance of getting Trump removed swiftly from being the president. He has done a lot of wrong and should be held accountable. But of course, it costs money to go against a powerful guy like Trump.”

Escobar went on to tell Global News that “nobody is as bad as Trump.”

“He is the worst cockroach in history. Cockroaches don’t die easily but when they do, they do it on their backs with their feet up and intimate parts exposed. Remember that I said that,” Escobar said.

Roberto is the former accountant and co-founder of the Medellín Cartel.

In 1993, Roberto was arrested and imprisoned, at which point he was injured in a letter bomb attack that left him half blind and half deaf. Since his release from prison, he has authored several articles, books, patents and is a co-founder of Escobar Inc.