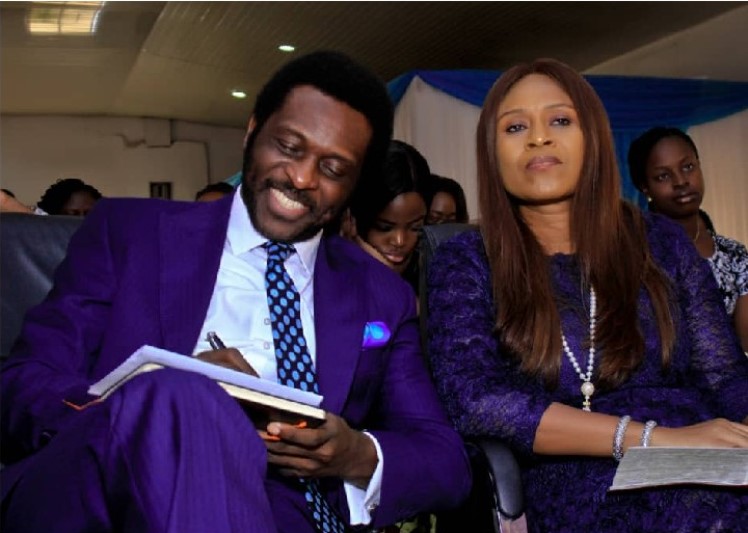 It was celebration galore for the family of popular Lagos Pastor, Dotun Ojelabi as he celebrated his 50th birthday in grand style. It was a 2 day event scheduled to celebrate this great man of many qualities.

August 17th& 18th, 2019 will forever remain a remarkable day for family, friends, well-wishers, most especially all members of Covenant Harvest Christian International Ministry, situated at 5, Ayo Babatunde crescent, behind Ebeano Supermarket, Oniru-Lekki, Lagos, as they celebrated their spiritual leader, their Pastor and a man of honor, who has paid his dues both in his professional career and in ministry.

The first leg of the event started on Saturday 17th of August, 2019, and it witnessed the presence of over 180 dignitaries from all walks of life. Family, friends and well-wishers stormed the prestigious Oriental Hotel, Lekki- Ajah Expressway, Lekki Lagos.

It was a 2 in 1 event. The occasion marked the celebration of his 50th birthday and launch of his new book titled “A textbook of West African History”.

Pastor Ojelabi’s father, Adekunle Ojelabi, was a renowned writer.Before his death, he worked on a number of books on History and Government, the most popular being “ A textbook of Government for West Africa” written in collaboration with  Chief Areoye Oyebola and Boluwaji Olaniyan and a Textbook of West African History; which is by sole authorship. According to the birthday boy, there is no better day to launch this historical master piece than on his own special day, and that explained why the entire arena was flooded with dignitaries. The fact also remains that Pastor Ojelabi is loved by many for his outstanding qualities.

One of the outstanding qualities that stood him out, according to many is his smile. Hardly will you see Pastor Dotun Ojelabi without a smile on his face, a smile that defines his pure and genuine heart. He’s a man that loves people around him and loved by many people. Many testimonies were said about this great man of God by family, family friends, Colleagues and well-wishers on the Thanksgiving Day. His journey into ministry was ordained by God and by the help of Holy Spirit it’s been backed up with signs and wonders.

Her Excellency Bamidele Abiodun, wife of the Governor of Ogun state, HE Dapo Abiodun was at this great event. She stormed in with her entourage to honour the celebrant, Pastor Dotun Ojelabi. Though she came a bit late, she came after the closure of the event, but she really took her time to rejoice with the celebrant and his family, danced to different songs from the Esteem Band that were on the band stand for the occasion.

FORMER PRESIDENT OBASANJO IS FATHER OF THE DAY

Former President Olusegun Obasanjo played a very prominent role. The role he played, contributed to the success of the event. He reflected on many things he put in place towards making sure the day remained remarkable and successful. Former President Olusegun Obasanjo and Pastor Dotun Ojelabi are very close. He played a big role in the preparation for this event. His intervention at the 11th hour when Chief Christopher Kolade couldn’t make it as the Guest Speaker. Baba was given few minutes to speak but he ended up spending over 40 minutes, but his speech was more than interesting and he was applauded for his wisdom.

Impact and involvement of youths in our country development was the topic Prof. Ibidapo Obe who was the guest speaker spoke on. Prof. Oyewusi Ibidapo Obe, a Nigerian Professor of Systems Engineering Educational Administrator and former Vice Chancellor of the University of Lagos marveled everyone by his speech and lecture. Though Chief Christopher Kolade was supposed to be the speaker of the day, but couldn’t make it and Prof. Ibidapo Obe came into the picture as portrayed by Chief Olusegun Obasanjo in his speech. How they contacted him, how he obliged despite that the invitation came at 11th hour was well appreciated by the celebrant and guests.

The Senior Pastor of Covenant Chritian Centre, Lagos,Pastor Poju Oyemade was also at the event and he showed some love to his brother and colleague, Pastor Dotun Ojelabi. He was very much around till the end of the programme, and he was among the dignitaries invited to launch the new book of Pastor Dotun Ojelabi.

Ovation Publisher, Bashorun Dele Momodu in his sky blue complete native wear dazzled at the 50th birthday celebration of Pastor Dotun Ojelabi. He was recognized almost immediately he came into the venue. Not long after, the overall boss of Bisi Olatilo show, Prince Bisi Olatilo Communications showed up in a gold colored lace material native wear to show some love to the celebrant. His contribution during the launching of the book revealed his closeness and the degree of his love for the celebrant, Pastor Ojelabi.

DR. OLUMIDE PHILIPS AND HIS WIFE HONOUR THE CELEBRANT

Dr Olumide Philips is very close to the family, it was so interesting when he reflected on being the chairman of Ojelabi’s wedding 25 years ago, and also jokingly took a swipe at his wife and Pastor Ojelabi’s wife on how they have taken care of their men looking at the old school pictures of the wedding that were among the displayed pictures on the gallery.

Just immediately after the cutting of the cake by the celebrant, his wife and some of the dignitaries in company of former President Olusegun Obasanjo, Otunba Bimbo Ashiru were invited to the podium to conduct the launching of the new book “A textbook of West African History”, a book that was written by the celebrant, Pastor Ojelabi’s father Adekunle Ojelabi, who was a renowned writer before his death. A man who worked on a number of books on history and government, the most popular being “ A textbook of Government for West Africa” written in co-operation with Areoye Oyebola and Boluwaji Olaniyan and a textbook of west African history. Being the simple man he is, Otunba Bimbo Ashiru conducted the launching in a simple and very respectful style. He committed all the dignitaries present to buying many copies after he had picked 10 copies already himself, and others followed suit.

The beautiful wife of the celebrant was at her very best in making sure that everyone was well taken care of and attended to. The beautiful children of the family also did excellently well in making the day a memorable one. The infectious smile of the man of the house has really rubbed on the family. There was joy written all over them as they attended to the guests one after the other.

AND THE THANKSGIVING WAS HELD THE FOLLOWING DAY

The 2nd Leg of the 50th birthday celebration of Pastor Dotun Ojelabi was a Thanksgiving Service held on the 18th, August 2019, at his church, Covenant Harvest Christian International Ministry situated at 5, Ayo Babatunde crescent, behind Ebeano Supermarket, Oniru-Lekki Lagos. In accordance with the policy of the church, their service started at exact 9am. The church members were at their very best, beautifully and gorgeously dressed to celebrate their pastor, spiritual leader, Pastor Dotun Ojelabi, on the occasion of his 50th birthday.

The service started with Praise and worship by the choir as led by 2 song ministers. One of the ministers led in worship while the other led in praises before a guest minister was invited for his special numbers. It was an awesome experience in the presence of God, and surely Pastor Dotun Ojelabi deserves it as stated by many members of the church.

READ ALSO: WHY I CHOSE TO CELEBRATE MY MUM @ ALAKUKO AREA – GENESIS PASTOR, ISREAL OLADELE SPEAKS ABOUT HIS MUM

How HARRISON AGBOIFOH Set Up 14 Estates In 7 Years