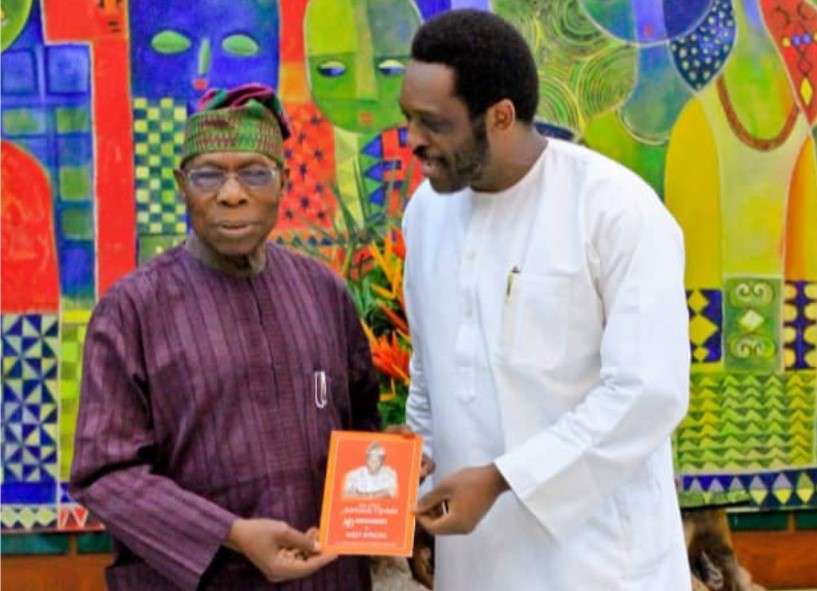 It was an unusual Easter Sunday at the Oriental Hotel, Lekki a few days back. The hotel witnessed a huge turnout of dignitaries who came to honour the Ojelabi Family on April 21st 2019. It was the 80th Posthumous Birthday Celebration of late Chief Adekunle Ojelabi and the presentation of his popular textbook of West African History.

Pastor Dotun Ojelabi is the Senior Pastor Covenant Harvest Christian International Ministry in Lagos. He and his family members decided to honour their late father who has contributed immensely to historical archives of the nation and West African Historiography.

The event started with Musical Interlude from Saxofix and Equinox band. Pastor Wale Adefarasin led the Opening Prayers, after which came the rendition of the National Anthem by Saxofix and Equinox band. Saint Rhymes as he is popularly called delivered catchy poetry lines on Africa as people with black skins, intelligence and historical evidence and not as homes of apes that developed into monkeys and later humans. Sucex Bright handled the introduction of guests. Fehintioluwa Ojelabi, the grand-daughter of Late Adekunle Ojelabi spoke on the influence of history to mankind with excellent poetic devices.

Professor Stephen Adebanji Akintoye who is popularly known as Prof. S. Banji Akintoye gave the Opening Speech and he said that a people without history are a people without existence. He also spoke on his relationship with late Chief Adekunle Ojelabi and regarded him as one of the greatest teachers of African history of all time. He recorded how they met as teachers in Ibadan Grammar School through Canon Alayande and that their friendship was based on scholarship, writing, history research, collective information to mention a few. Chief Aare Oyegbola also in the team make them 3 friends of great interest in scholarship.

He also mentioned that he has not seen any other book as comprehensive and competent about West African History like that of his friend late Adekunle Ojelabi. He said his books are quintessential for secondary schools. He thanked Pastor Dotun and family for not forgetting the legacy of his late friend and he is so proud of them.

Soni Irabor, an ace broadcaster of high repute spoke on how he hosted about 7 programmes agitating that history should not be taken away from the Curriculum of Schools and he remembered one of his friends saying that they would not have dared to suggest the removal of History from the curriculum if the likes of late Chief Adekunle Ojelabi were to be alive. Shortly after, Fikunayo Ojelabi read the Biography of late Chief Adekunle Ojelabi his grandfather.

Pastor Tunde Bakare was represented by Mr I. D. Enang who gave the Keynote address on how history has been taken with levity. He also mentioned that nobody can tell people history better than people. He emphasized the fact that the foundation of history learning and teaching is the home. A parent who does not know his or her history well enough, cannot pass it across to younger generations. He urged everyone present to dig deep into history so as not to feed on what they are being told.

Then it was time for the Book Review of the textbook and presentation and the panellists were made up of Dr Tunde Adegbola, Adebola Williams (the C.E.O Of Red Media, Hon. Augustine Kpebe Ngafuan ex-Minister of Finance in Liberia. They all spoke about how the book has helped their knowledge of history. The summary of their speeches show that the knowledge of History is endless and it is from one point to another. History gives us a sense of identity and belonging and a nation without history has no existence or identity.

Tonye Patrick-Cole, a businessman who is an Executive Director and co-founder of Sahara Group invited Pastor Dotun Ojelabi to join him in unveiling the Adekunle Ojelabi Foundation and Book Presentation. The Textbook of West African History was launched and donations were given in that regards to flourish the foundation.

Dr, Mrs Adenike Adedokun gave a Special Vote of Thanks to everyone who honoured the occasion with their presence, cash gift and also supported the foundation in one way or the other. She prayed for journey mercies to their destination.

Apostle Bamgbola the Chairman, Christain Association of Nigeria, Lagos Chapter handled the closing prayers to wrap up the event.

As a writer, in his lifetime he had has worked on a number of books on History and Government, the most popular being “A Textbook of Government for West Africa”(written in co-operation with Areoye Oyebola and Boluwaji Olaniyan and A Textbook of West African History: which is by sole authorship. Subscribes articles on “African History” to Home Studies Magazine and directs the educational administration of the Bamiyowa Evening Classes, Oke-Bola, Ibadan.

He was the Treasurer of the Nigerian Union of Graduate Teachers 1967-1972 and the General Secretary of the Association of History Teachers of Nigeria, He has interest in Drama, Chess, Music, Swimming, Literature and Educational pursuits.