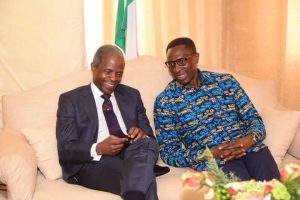 Nigeria’s Vice President,Prof Yemi Osinbajo, is one of the redeemed church pastors.The man of God, who turned 60 years old a few days ago, was the Pastor in charge of the Lagos Province 48 (Olive Tree provincial headquarters) of The Redeemed Christian Church of God, Banana Island,Ikoyi before his inauguration as the Vice President of Nigeria.Though he is still a pastor of the parish contrary to some speculations that he has resigned as RCCG Pastor. He, however, still insists that he remains the pastor-in-charge of the said province and according to him he is only on Sabbatical. Prof Osinbajo’s journey to the Lord’s ministry and, therefore, becoming a pastor is a motivating one when his path crossed with that of a senior pastor of House of Freedom,This present house church on Lekki.

The 2 men of God have something in common. They are both 60. They are well read,and both are pastors. Besides, they are friends.It was a worthy encounter when their paths met as far back as early 90’s and crossed that was what changed Prof Osibajo’s life thus starting a new life in Christ.There is an annual rally that is always been organized by House of Freedom and during the last year rally, Prof Osinbajo was one of the important dignatries, who was at the event for Nigeria’s 56th anniversary. Pastor Osinbajo took all down memory lane and talked about his encounter with pastor Tony Rapu, which led him to Christ 24 years ago. He also spoke about how he prophesied how successful some of their group members would become in the nearest future. In his words, “… I came to know the Lord through ….Pastor Tony Rapu…. As a professor of law of evidence, everything must be demonstrated by proofs. Scientific proof, logic. If it does not make sense, then there is no sense in it. But this man led me to understand the evidence of things that are not seen. In 1993 …. I came to the Redeemed Christian Church of God, Apapa Parish, where Pastor Tony was pastoring…. I was in a workers group. Guess what he named that workers group? – GOVERNMENT! It was prophetic, – unbelievable, the number of us who actually went into government.… Oby Ezekwesili was in the same group. She, of course, became Minister in two different departments… The prophetic word had gone forth….”

Prof Oluyemi Oluleke Osinbajo  is the Vice President of the Federal Republic of Nigeria. He is also a Senior Advocate of Nigeria, (SAN) Professor of Law and a Senior Partner at a law firm.He got his LLB degree from the University of Lagos. He is the Chairman of the University Board of Trustees (BOT) and a senior partner at SimmonsCooper Partners, a former Attorney-General of Lagos State and former Commissioner for Justice.He has written several books on civil procedures in Nigerian superior courts, rules of evidence and justice reform. Prof. Osinbajo has more than 31 years of litigation experience including significant trials and appellate works.

Tony Rapu was born same year in Kano on January 1st, 1957, the only son to an Igbo Catholic family. He is the fourth of six children. His father, T.D. Rapu, worked with the Nigerian Customs, while his mother, Maria Rapu (nee Ofili), was a teacher. He grew up as any well bred, middle class young man said those who knew him at King’s College, Lagos in the 70s or in the 80’s at the University of Ibadan where he took a degree in Zoology and later in Medicine.

How Pastor TONY RAPU Led VP OSINBAJO To Christ 24 Years Ago + How It Happened was last modified: March 19th, 2017 by Tayo Oyediji