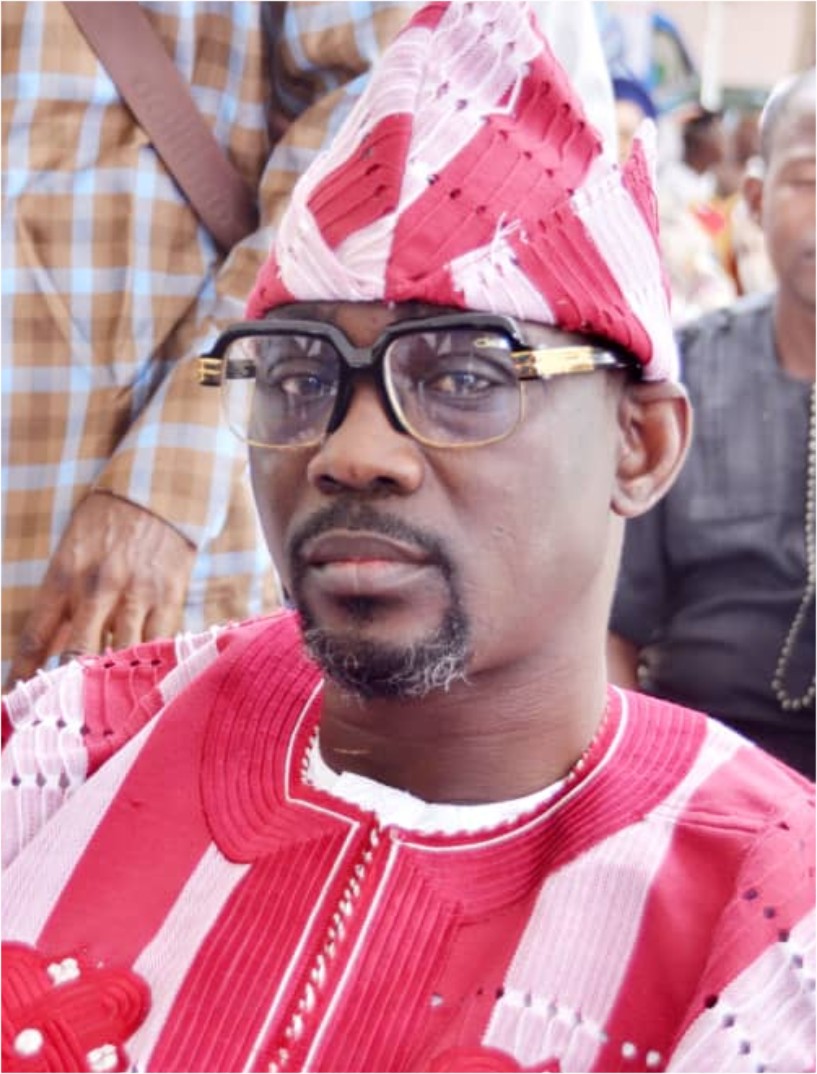 The wedding of Pasuma’s daughter, Barakat may have come and gone, but the details of the grand wedding will remain indelible in the minds of many who attended. Below are details of the classy event.

On Thursday the 8th of April 2021, the morning dawned like that of a fairy tale as Oyindamola Barakat Odetola tied the conjugal knot with the love of her life Alhaji Tunde Bello. The colorful event will top the list of the events you can never forget in a hurry this year, as Pasuma held a Carnival-like wedding for his daughter in Lagos. Over 5000 celebrity guests and dignitaries stormed Cannanland Event Center, Ojodu Berger. It was an auspicious day for Barakat Odetola and Tunde Bello which was witnessed by family and friends. The event witnessed the performance of the high flying artist K1 the Ultimate and Seyi Law who performed as the master of ceremony and kept a smile on the faces of everyone present. The venue was heavily guarded by uniformed and able-bodied men to maintain order as expected in any celebrity event.

The Nikkah ceremony began with the mind-blowing entrance of the bride and groom alongside their parents as they gleamed in their carefully picked-out Aso-Ebi. The bride danced into the ceremony in her father Pasuma’s arm as she was surrounded by her friends.  This was followed by the entrance of Nollywood stars as they walked in pairs, dressed in the Aso-Ebi and with big smiles on their faces.

City People TV team were at this talk of the town wedding and brings you gists.

The choice of Venue was perfect. The venue for the wedding was Canaanland Hall at Ojodu Berger by River Valley Estate. Its a beautiful venue and very spacious. But despite how spacious the venue was, guests filled up the place.

ABOUT THE BRIDES MUM

The wedding was a 3-in-1 wedding. The Engagement ceremony held in the morning, with mainly family and close friends. It was followed by the Nikkah. Then the reception followed at the same Canaanland Venue. The theme for the event hall was White and Gold. The Event Planner was Swalek Bridals and The Chief Brides Maid was Mistura Ademoye.

IYA RAINBOW WAS UP AND DOING

The first celebrity that made it to the venue was the veteran actress, Prophetess Philip popularly known as Mama Rainbow. That is to be expected. She has always told everyone she is Pasuma’s mother.  She came early, looking so elegant in her blouse and wrapper of the Aso Ebi. She came in to make sure that all is in place for the intending party as all vendors beckon to her demands. During the event, she sat as the mother of the Fuji music maestro, Pasuma Alabi.

The veteran Nollywood actor also made a noticeable appearance at the event walking neatly dressed in the Aso Ebi. On noticing the presence of the elderly actress, he prostrated to greet her after which he plants a kiss on her cheeks.

At the event, the bride and groom alongside their parents made a stunning entrance as they both were driven by a chauffeur in three different G-wagon automobiles that kept the guests’ heads turning to catch a glimpse at the convoy. This is believed to be the expected entrance of the Fuji artist.

As all celebrities showed their support to their friend and colleague (Alhaji Pasuma Alabi), the Ibadan-based Fuji artist graced the occasion with his presence. His support for the Fuji artist was fully reflected in his presence with the family a day to the event. He also expressed his fatherly support to the couple when he donated to the officiating Sheu the whooping sum of a hundred thousand naira, this was for the request for the special prayer for the conjugal bliss of the couple.

Alhaji Pasuma who is well known by all for his humility and gentle personality rose to attend to guests having difficulties in accessing the reception hall. At the conclusion of the engagement ceremony, guests began to migrate to the reception hall which was beautifully decorated with colorful petals and roses. The hall was heavily guarded which required guests to stay in a queue. Pasuma on noticing this approached the entrance and gestured all guests into the hall with a happy smile on his face.

At K1 The Ultimate continued to hold the stage when he triggered the emotions of the father of the day. The star artist frantically began to sing the praises of Pasuma as he danced when he suddenly broke down in tears. This shows the level of love and respect between the two fuji maestros as this was a dream come true for Pasuma.

As expected, celebrities from the movie and music industries were present at the event. The presence of the legendary music artist took everyone present by surprise. Showkey walked into the venue during the Nikkah ceremony. The bride’s father roses to recognize his presence with a hearty handshake.

Pasuma Wonder is one man who everybody loves. that explains why many celebrities including known actors stormed his daughter’s wedding. Faithia Balogun was among the first early birds. Olaiya Igwe and Madam Saje were also sighted. Toyosi Adesanya’s relationship with the Pasuma’s family did not go unnoticed as she was also there to show her support. There were a host of many other actors like Jigan, Omobanke, Akintunde Yusuf (Eko), Wasilat Coded, Ayoka, Alobalowo Rachel.

MC OLUOMO and HIS ENTOURAGE

As the list of dignitaries continued to widen, the entrance of Mc Oluomo stole the spotlight as he walks in with a number of men all dressed to suit the event. Pasuma in the frenzy still recognised his presence.

We can’t but talk about how these super actresses, Iyabo Ojo and Kemi Korede dazzled at the event. The duo was seen keeping each other company as they danced to every moment from the king of fuji himself, King Wasiu Ayinde Marshal.

As we always trust celebrity lady, Joke Shogunro, she is one of the big babes that made a fashion statement at Pasuma’s daughter’s wedding. As expected, you need to see her jewelry on display as it complimented her elegantly styled Aso Ebi. From head to toe was a touch of glamour for Joke Shogunro and some of her friends.

WHY PASUMA WILL ALWAYS REMAIN LOYAL TO K1

Apart from the fact that K1 took the center stage at Pasuma’s daughters’ wedding Barakat, which was a dream come true for Pasuma which many also see as the maximum respect for their relationship contrary to the beliefs of many people especially their fans. K1 and Pasuma’s relationship continues to wax stronger. This is another evidence of their strong relationship aside from the previous video clips making rounds on social media when Pasuma was seen prostrating and hailing K1 the Ultimate. Therefore it was not a surprise when K1 stormed the wedding of Barakat in his Rolce Royce. Pasuma was seen welcoming him in a triumphant way. One can see the joy on his face as he prostrated almost fifteen times in welcoming him, he was also saying emphatically that; no matter what anybody says, he will continue to remain loyal to K1, he was seen calling K1 “Oga Nla”, “no 1” althrough. Summing up all these, one will conclude that their relationship has finally come to stay.

At the just-concluded Pasuma’s daughter’s wedding, K1 de Ultimate while thrilling the guests, responded to the allegation of his alleged affair with Wasilat. It was also discovered that Pasuma’s daughter, Wasilat was also on a video call, either with facetime or WhatsApp with her father, somebody gave the phone to K1, who prayed for her and sang-praised her. In his statement. “Many people rumored that I had something to do with Wasilat. They said I’ve dated Wasilat. I asked; who has ever prayed to date his grandchild? I have never thought of it, as I’ve learnt never to react to some rumors. One of the reasons why I accepted to be here this night is to prove to the world that there is no fight between me and Pasuma. Today, I am the father of the bride’s father. Pasuma is my son and will forever remain my son, so it’s not possible for me to have any affair with my grandchild. I’m used to many names people are calling me. Some even call me Alagbe (beggar), but as I said I’ve learnt never to respond to any allegation or rumor again”.

Tell us about Barakat. Who is she? What does she do?

“Oyindamola Barakat Odetola is a 27-year-old graduate of Politics and International Relations from Lead City University, and M.Sc International Law and Diplomacy from the University of Lagos”.

Tell us about you and your dad, Pasuma. What do you like about him?

“My dad has a lot of qualities that I really respect and learn from. He is a very selfless and contented man who almost always places the need to better the lives of people over his own personal satisfaction. He respects the choices and decisions of his children and allows us privacy and independence. One thing that may be hard to believe about him is that he is not an outgoing person, if it is not about work, he will choose to stay at home to watch sports, movies and hang out with family and friends.

Tell us about your husband. How did you meet and fall in love with him? What do you like about him?

“His name is Olajuwon Babatunde Bello. We met in 2014, just before I went for my NYSC service. We knew at that point what we wanted with each other and we had these plans for the future. We share a lot of common values and ideologies; in life goals and perspectives, even in smaller things like appreciation for certain types of music and art, and aesthetics, though there are also differences that we both respect. We’ve been very much involved in each other’s lives end decision-making processes since then, that level of transparency is one of the many reasons why we chose to be life partners.”

The New Drugs Youth Now Take To Get High