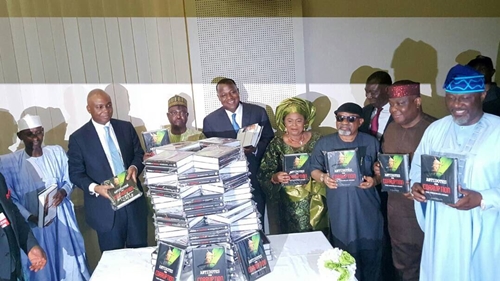 Senator Dino Melaye has launched a book on the solution to Nigeria’s corruption problem titled “Antidote for Corruption,” at the Shehu Musa Yar’ Adua centre in Abuja.

Popular Nigerian politician and a member of the 8th National Assembly, representing Kogi West Senatorial district, Dino Melaye, has on Monday morning, successfully launched his anti-corruption book titled; “Antidote to Corruption” in an event at the Musa Yara’dua centre in Abuja.

Among the dignitaries who are at the occasion are the former first lady, Patience Jonathan, the senate president, Bukola Saraki, his counterpart at the House of Representatives, Yakubu Dogara, deputy president of the Senate, Ike Ekweremadu, the minister of Federal Capital Territory, Alhaji Bello Mohammed, his Labour and Productivity counterpart, Dr. Chris Ngige and former secretary to the government of the federation, Dr. Anyim Pius Anyim.

The book, titled ‘Antidotes for Corruption’, is divided into 14 chapters with 600 pages. Former Speaker of the House of Representatives, Rt. Hon. Umar Ghali Na’Abba, in his opening remarks, said the book was timely as it would help in the reorientation of the youths and leaders of the country on the dangers of corruption. Meanwhile, despite the surprise which greets the news of Melaye becoming an author, Babatunde Faniyan wrote; “Senator Dino Melaye needs no introduction. Too many Citizens, however, are ignorant of who is the REAL man and personality behind the name.

“He is coming out with a Book on his favourite, passionate subject as a Democratic Evangelist and Anti-Corruption crusader: CORRUPTION! “The book: “Antidotes for Corruption – The Nigeria Story”, launched to the world May 15, 2017.” Senate President, Dr Bukola Saraki wrote the Foreword to the Book, saying; “Dino is as fearless as he is brutally honest. He is a man who would not call a spade by any other name because he wants to be in anybody’s good books.”

Patience Jonathan, Saraki, Others as Special Guests at Dino Melaye’s ‘Antidote to Corruption’ Book Launch [Photos] was last modified: May 15th, 2017 by Arinze Ago

Novak Djokovic On The Verge On Discovering His ‘Mojo’ Again