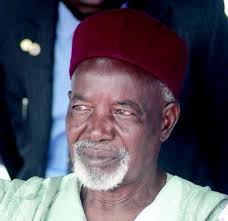 Former Governor of Kaduna State, Balarabe Musa, says the signing of a Memorandum of Understanding (MoU) by 39 political parties and groups ahead of the 2019 general elections is an act of “opportunism”.

Mr Musa said this in an interview with the News Agency of Nigeria (NAN) in Abuja on Tuesday.

He said, “I don’t think a coalition like this which is opportunistic will be able to defeat the governing party that is, the All Progressives Congress (APC).”

The national chairmen of the political parties signed the MoU pledging to work together under “Coalition for United Democratic Parties (CUDP)’’ to produce a presidential candidate for the forthcoming election.

Mr Musa, who is the national chairman of Peoples Redemption Party (PRP), said his party was not part of the coalition.

“Remember, the reason for coming together is simply because they have lost the opportunities for sharing power.

“There is no fundamental difference between them and the APC; they are just an electoral gang to defeat the APC. I don’t think the coalition is enough,” he said.

According to him, what is needed is an alliance which is ideologically more focused than the APC and not just an aberration of what APC stands for.

“In any case also, they have to contend with other alliances. I don’t think it will make any difference at all.

“Between now and August, we will know whether they can make qualitative difference and do what APC is able to do,” Mr Musa said.

“We should know that there should be some way we can reconcile all Nigerians to be united as one united, democratic Nigeria based on credibility, national unity and even development of the whole country.

“Secondly, we must ensure there is free, fair and transparent election leading to a legitimate government.

“At the moment, the Executive and the Legislature are after each other, they are fighting to the finish.

“They have been doing that right from the beginning of this government since 2015. That has to stop,” Mr Musa said.