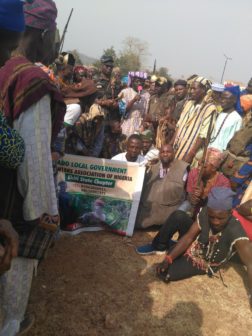 All is now set for the primary of the PDP to pick its candidate for the July 14 governorship election for Ekiti State.

The delegates, some of whom are in uniforms but without logo or any inscription, are being accredited at Dove Event Centre, a few metres away from Eagle Hall where the election will take place.

After accreditation, which is being done according to local governments, the delegates are being conveyed to the voting centre in luxury buses bearing the inscription of the state government.

Three aspirants are contesting the party’s ticket. They are the Deputy Governor, Prof. Kolapo Olusola, a former Minister of State for Works, Prince Dayo Adeyeye and the senator representing Ekiti South in the National Assembly, Mrs Abiodun Olujimi.

Two thousand and nineteen delegates are voting in the primary which is under a very tight security.

Journalists and others are being screened by fierce-looking policemen stationed at the gates to ensure adequate security of the event while those who are not directly involved in the election are barred from entering the hall.

Four perforated laundry baskets, ostensibly to be used as ballot boxes are already placed on the tables.