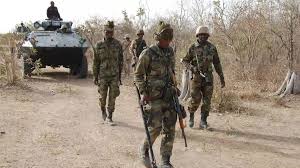 The Peoples Democratic Party, PDP, on Tuesday commended Nigerian soldiers for the uncommon bravery they displayed at dislodging Boko Haram from Sambisa Forest in north-east Nigeria.

“We salute the men and women of our beloved armed forces. Their courage, determination and sacrifice made this achievement possible,” the PDP said in a statement signed by its interim spokesman, Dayo Adeyeye.

The forest, hitherto known as the major hideout of the insurgents, fell to Nigerian troops last week.

President Muhammadu Buhari, who announced the development on December 24, described it as “the final crushing” of Boko Haram.

The clearing of Sambisa Forest is one of the biggest achievements recorded by the Nigerian government against the terrorists in the battle that has dragged for seven years.

It was achieved less than a month after the military launched ‘Operation Rescue Finale’ to clear Boko Haram remnants from the forest and free thousands of civilians believed to have been trapped there.

The PDP in an unusual gesture this afternoon joined other Nigerians to laud President Buhari for the dogged manner in which he handled the insurgency, but was also quick to add that his government parlayed the success of his predecessor in achieving the latest success.

“We congratulate Nigerians for this important milestone in the long and bitter struggle against the forces of evil that have wreaked so much suffering and hardship on our people in the last few years.

“We also congratulate the president for his dogged pursuit of the war against insurgency. We are happy that he has built on the efforts of his predecessors.

“Whatever we are witnessing now is as a result of all the efforts and sacrifices of the past and present. Nigerians and the international community will recall that the war effort received a major boost in the weeks leading up to the 2015 general elections.

“The insurgents were virtually annihilated – a feat that made it possible for elections to hold peacefully in almost all the local government areas of all the states in the northeast last year.

“We are therefore very much delighted with the continuation of this great effort by the president,” the PDP said.

The party urged President Buhari to look into other parts of the country where violent activities have recently surged.

“Beyond Sambisa all the other forests which criminals used as hideouts and bases must equally be cleared by the military.

“Forests such as Birnin Gwari, Zamfara, Southern Kaduna, Enugu and Benue have become killing fields. They must all be cleared of criminal elements.”