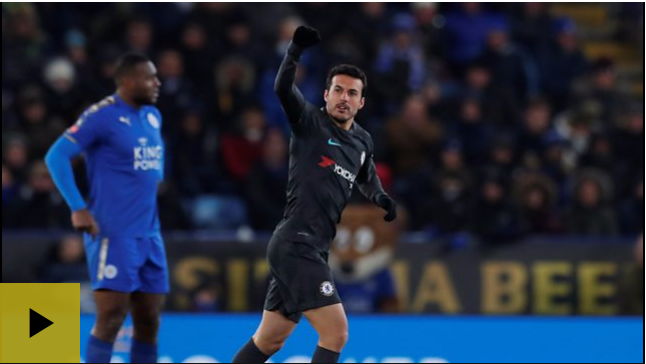 Chelsea substitute Pedro headed in an extra-time winner to see off Leicester City and put the visitors into their second successive FA Cup semi-final under manager Antonio Conte.

An even tie was decided when Kasper Schmeichel’s rash decision to come off his line was punished by Pedro, who beat him to N’Golo Kante’s cross.

Alvaro Morata had slid Chelsea ahead in the first half of normal time.

But Leicester’s Jamie Vardy smashed in from close range to force extra-time.

Earlier on Sunday, Southampton reached the last four by beating Wigan, and join Manchester United and Tottenham Hotspur – who both won their quarter-finals on Saturday – in the semis.

Leicester’s defeat means their wait for a first FA Cup semi-final appearance since 1982 goes on.

Relatedly, Mark Hughes guided Southampton into the FA Cup semi-finals in his first game in charge with a 2-0 win at Wigan on Sunday.

Pierre-Emile Hojbjerg and Cedric Soares scored their first goals for the club to seal Southampton’s passage from the FA Cup quarter-finals for the first time in 15 years, Sky Sports reports.

Wigan were looking to reach the last four for the third time in six seasons and the 2013 winners dominated the first half but paid for not taking their chances.

Hojbjerg hooked in a 62nd-minute corner for his first Saints goal and Manolo Gabbiadini then had a 73rd-minute penalty brilliantly saved by Christian Walton before Soares added a second in stoppage-time.

Bunmi 1 Fashion House Is The Best Designer In Nigeria