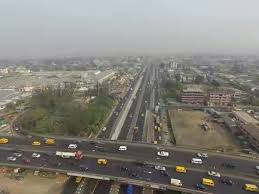 Traffic and vehicular movement on the Lagos-Ibadan Expressway has improved significantly, following the completion of the first phase of rehabilitation work on the Long Bridge between Berger in Lagos State and Warewa Village in the Obafemi Owode Local Government Area of Ogun State on the ever busy Expressway.

The Long Bridge, constructed between 1975 and 1977, is a concrete deck on piles structure consisting of two almost 4.5 kilometre long bridges which provide four lanes for traffic in each direction along the Lagos – Ibadan Expressway, between km 7+425 to km 11+870 in Ogun State. The rehabilitation by the Federal Government is the first after 40 years of the road being subjected to high traffic volume.

Minister of Power, Works and Housing, Mr. Babatunde Fashola SAN, who was on an inspection tour of the project being handled by Messrs Julius Berger, expressed delight that the completion, which came ahead of schedule, would ease movement of vehicles, persons, goods and services along the road which serves as a major link between Lagos and the rest of the country.

Describing the completion as timely in view of the approaching Christmas and New Year festivities when the volume of traffic is expected to increase on the road, Fashola, however, advised motorist to observe the speed limits and traffic regulations to avoid accidents and loss of life on the now much improved Expressway.

The Minister, who expressed gratitude to the contractors for concluding the work ahead of schedule, noted that apart from managing the heavy traffic on the road to ensure that accidents were reduced to the barest minimum, the contractors also had to move 35,000 tonnes of scarified materials excavated from the bridge using trucks and trailers.

“They did this being sensitive to the vehicular movement on this road and I think this is a sort of concern that we must appreciate from them. This is important in order to respond to some of the people who genuinely were concerned and made insinuations that “oh the contractors were insensitive”. So if you want evidence of the sensitivity of the contractors, this is it; that they have finished ahead of schedule while the work continues”, he said.

“To guarantee a continuous supply of asphalt from the mixing plant to site daily up to 25 trailers delivered asphalt on a daily basis”, the Minister noted adding that while those trips were going on, there were 1,000 trips of asphalt, 1,000 trips of aggregates, 60 trips of bitumen and 2,000 trips of scarified materials.

The Minister, however, explained that the rehabilitation work on the Long Bridge continues because the 4,500metre bridge still needed about 88 joints to install with 44 on each side, adding, “So the work is not finished on this section of the bridge. The asphalting extends to kilometre 46 to Shagamu and as you have heard from the contractors, they are asphalting between kilometre 30 and 33. There is still a lot of work and a lot of management”.

Thanking commuters for their patience during the period of construction, the Minister, who, however, emphasized that the work was not finished, said the commuters would clearly experience more enhanced vehicular movement.  He  declared, “This is important because there will be other diversions further down the road by Julius Berger on this section and by RCC on the Shagamu-Ibadan section; and by many of our contractors across the country, Kano-Maiduguri, Aba-Port Harcourt, Jebba-Ilorin and all other roads in all of the states where we are working”.

Fashola, who called for patience and cooperation of commuters during this period of construction, promised that with their cooperation and compliance they would have “better journey experience, month after month, year after year”, adding “This will bring ease of doing business, reduce cost of doing business, cost of food and this is the way we rebuild our economy and grow our economy out of recession”.

“I want to appeal to those who over-speed and those who drive under the influence of alcohol and substance abuse; your lives are important to us. After solving the problems of the roads, we don’t want to begin to experience loss of our very important human capital”, the Minister said pointing out that government couldn’t close down the road while rehabilitating it because of its strategic importance.

“So we had the problem of repairing the road while you used it. We appealed for patience; not a lot of people showed patience; some jumped queues, people diverted the roads and we had to do a lot to manage the traffic”, he recalled.

The Minister also thanked the Federal Road Safety Commission team including Corps Marshal as well as the staff of the Ministry of Works and the Federal Controllers of Works in Lagos and Ogun States, the Minister of Defence and the Police for their assistance, urging them, however, to continue supporting the Ministry on the roads being worked on across the country. “We need help from that side of Government and they have responded at the best of time”, the Minister said adding that the patience and sacrifice made by all including inconveniences they endured while the work was going on would benefit all now that the bridge was finished.

Also noting that there would be improved motoring experience on the road, Fashola declared, “Criticisms and debates help us to deliver on the promise of this Government led by President Muhammadu Buhari that things will change for the better. It shows that so far governance is concerned, we are in a result driven business”.

The Minister, while wishing all Nigerians a happy Christmas and New Year celebrations, again added, “I must emphasize again and again, drive carefully, drive safely, observe traffic rules, and do not drive under the influence of alcohol. If your tyre is bad, stop and repair it and continue your journey. Essentially we want you to arrive alive”.

Phase 1 Of Rehabilitation Work On “Long Bridge” Over was last modified: December 20th, 2016 by Daniji Emmanuel

7 Popular Markets Where You Can Buy...