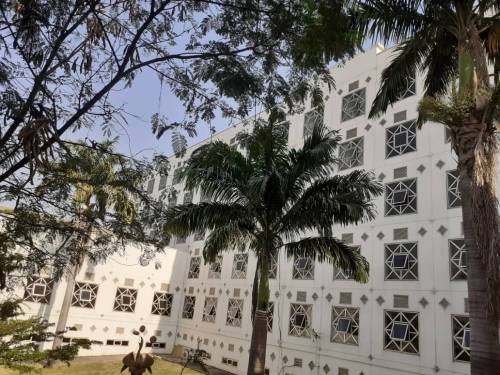 Pictures they say speaks louder than words, this was the impression gotten as exclusive images of the National Assembly complex has shown that the facility is still in good shape and not in need of a renovation as portrayed by Nigerian federal lawmakers.

The legislators had said that some parts of the complex were leaking and old, prompting the need for N37bn to renovate the complex.

Despite public outcry generated by the situation, President Muhammadu Buhari approved the funds for the lawmakers.

In a bid to justify the scandalous renovation, the leadership of the National Assembly had claimed that the building has never been renovated since 1999 but contrary to such claim, Journalists can confirm that the complex had undergone renovation and expansion running to several billions of naira in the past.

Not only do pictures of the complex show that the facility is in good shape, but it also showed that there was no reason for such a huge sum for its renovation.

Eze Alloysius, Secretary of Peoples Alternative Front, slammed the federal lawmakers for attempting to expend N37bn for renovation despite the dwindling economy and other challenges facing the country.

He said the National Assembly should put the people first and come up with laws and policies that will be in favour of the masses.