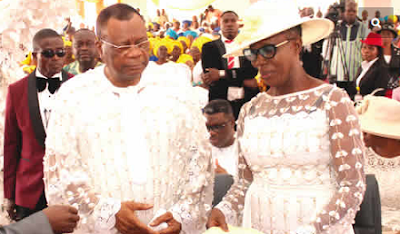 Prophet Abiara has remarried! Recall he recently announced he would be re-marrying almost two years after his wife’s death? It happened on Thursday. The man of God tied the knot with one Grace Ojewande who is in her 50s and has never been married nor have kids.

Grace is a native of Ifetedo in Osun State and a Level 16 officer at the Lagos State Ministry of Education. She worships at the Mountain of Fire and Miracles Ministries.

PhotoNews: Oluwo with Dambazzau, Buratai and Olonisakin at the wedding ? reception of Dangote daughter in Lagos