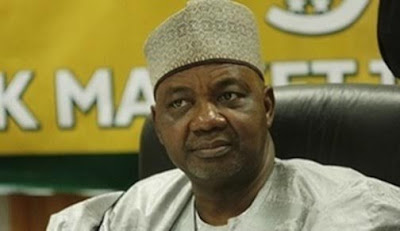 Former Vice President, Namadi Sambo has alleged that there are plans by some persons to implicate him in the ongoing war against corruption that is being prosecuted by the Buhari-led administration. Sambo in a statement released today, said the repeated unnecessary search of his home in Kaduna, have shown that there is more to the search that is being carried out.

Last week, operatives of the Department of State Security DSS and ICPC officials, raided the Kaduna home of the former Vice President. They left his home after the found nothing implicating. The latest search would be the fifth in a row. Sambo said he is apprehensive that a repeat of Commando-style raid of his residence will not be surprising if an incriminating object is planted in order to willfully and deliberately incriminate him. The former Vice President said this in a statement released by his Media Adviser, Umar Sani,reads:

“In the late afternoon of Wednesday, the 28th of June 2017, the Alimi Road, Kaduna un-occupied residence of the former Vice President Arc Mohammed Namadi Sambo, GCON, was invaded by security operatives armed with a search warrant, who conducted a forensic search of the entire residence. Initially, we were at a loss as to their identity but later discovered that they were operatives from the Independent Corrupt Practices and other related offences Commission (ICPC).

This raid brings to five the number of times the residence was searched within a period of six months and on each occasion valuable fittings were deliberately destroyed. It is worthy of note to state that no such brazen attempts were made at any point, either at his Link Road Kaduna residence, or his Abuja apartment, which he presently occupy. As the visit of the operatives was unscheduled, the reasons for the search were not specifically stated. However, the outcome of the search was made known.

At the end of the whole exercise, the officers, who carried out the search were satisfied that nothing incriminating was found. As a law-abiding citizen, the former Vice-President did not raise any alarm in the previous invasions in view of the fact that he has nothing to hide. The recent desperation exhibited by some security agencies in carrying out a raid on an unoccupied residence blocking all entry and exit points, in a commando-style and coming along with a bullion van speaks volumes of the clandestine intention of the security operatives. It is therefore worrisome to note that the consistency with which the searches occurred and the intervals between them portrays a desire of a fault-finding mission.

We are apprehensive that a repeat of such episode will not be surprising if an incriminating object is planted in his residence in order to willfully and deliberately incriminate him. It is against this background that we wish to draw the attention of the unsuspecting members of the public to this phenomenon. The desperation of some of the security agencies is glaring by the number of times such searches were conducted and still counting. We hope it is not a way to try to give a dog a bad name in order to hang it”.

There are plans to implicate me for corruption- Ex VP Namadi Sambo cries out was last modified: July 2nd, 2017 by Reporter

‘I married as a virgin’– Actress Biodun Okeowo