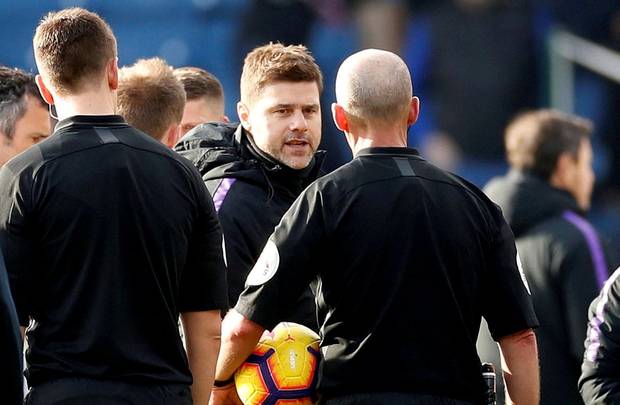 Tottenham Hotspur manager, Mauricio Pochettino has been given a two-match touchline ban and fined £10,000 by the Football Association for angrily confronting referee Mike Dean after his side’s 2-1 defeat at Burnley.

Pochettino admitted he “crossed the line” with the official and later made a public apology to Dean.

The 46-year-old accepted an FA charge of improper conduct.

“It is not the way to behave,” he said following the incident.

Dean was later moved from his fourth official duties for Spurs’ game at Chelsea the following week.

Pochettino will serve his ban in the Premier League games against former club Southampton at St Mary’s Stadium on 9 March and at Liverpool on 31 March.

The Argentine did not reveal what was he said to Dean at Turf Moor, or the reason for his strong reaction, although he had complained about a corner awarded in the build-up to Burnley’s opening goal.

Pochettino had said he was not anticipating a ban.

“A ban, why? I don’t believe that it’s going to happen. I don’t think that’s going to be fair,” he said.

“I don’t believe it’s fair. But I’m going to accept if they ban me and I can’t be in the dugout against Southampton.”

It is fair to say Tottenham are pretty unhappy at the severity of this punishment.

Given Pochettino apologised at the time and has an unblemished record in six years as a Premier League manager, first at Southampton, and now Spurs, the feeling was a fine and a warning would be the likely outcome.

Yet, speaking after Tuesday’s Champions League victory in Dortmund, Pochettino hinted there was bad news on the way. So it has proved, meaning Tottenham’s manager will be absent from the dugout for both his return to Southampton and the key Premier League game against Liverpool at Anfield.