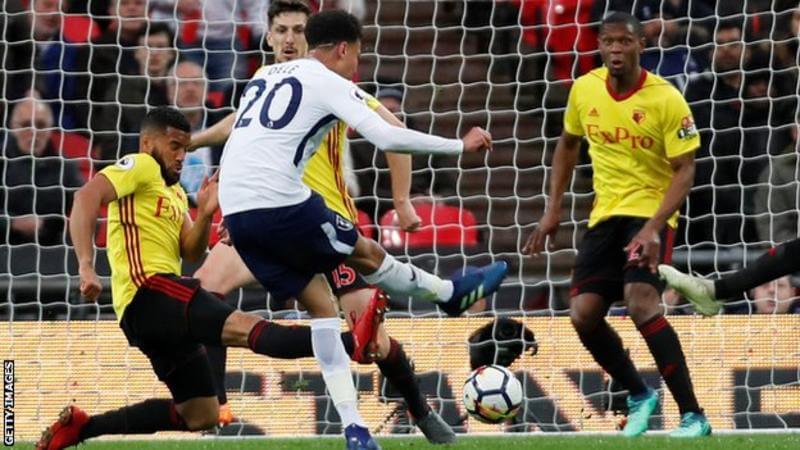 Goals from Dele Alli and Harry Kane gave fourth-placed Spurs a scrappy victory at Wembley Stadium that took them five points clear of Chelsea with only three matches to play.

“It was a game we had to win and we won, so I’m happy about that,” said Pochettino. “Maybe the performance was not great, but the most important thing is to get the three points.

“This is massive. It puts us in a very good position fighting for the top four and that is the objective for the rest of the season.”

Spurs capitalised on an error from Hornets goalkeeper Orestis Karnezis as Christian Eriksen set up Alli and the England midfielder scored from 12 yards out.

Kane doubled Spurs’ lead early in the second half from Kieran Trippier’s pull-back and Jan Vertonghen later headed against the post.

Spurs goalkeeper Hugo Lloris denied Andre Gray and Richarlison, with the Brazilian also shooting over from six yards out.

The visitors are still not guaranteed Premier League safety and this defeat extended their winless run to seven matches.

It was a welcome goal for Kane, who had only scored twice in his previous eight games, with one of those efforts – the winner at Stoke on 7 April – controversially awarded to him by the Premier League goals accreditation panel after he claimed Eriksen’s free-kick had touched his shoulder before going in.

Nevertheless, there was no doubt about Kane’s 27th league goal of the season – his 38th in all competitions – in the 49th minute when he steered in Trippier’s pass.

That goal means Kane is four behind Liverpool’s Mohamed Salah, who has 31, as the England centre-forward aims to win the Golden Boot – awarded to the Premier League’s leading goalscorer – for the third successive season.

Kane had earlier wasted two chances, with a weak side-footed effort directed at Karnezis, and another opportunity slipping away with a heavy touch when collecting a pass from Son Heung-min.

With England manager Gareth Southgate watching on, Kane had further chances to add to his tally but failed to connect with the rebound after Vertonghen’s header hit the post and then had a goal ruled out when he was offside, moving too early from the Belgium defender’s pass.