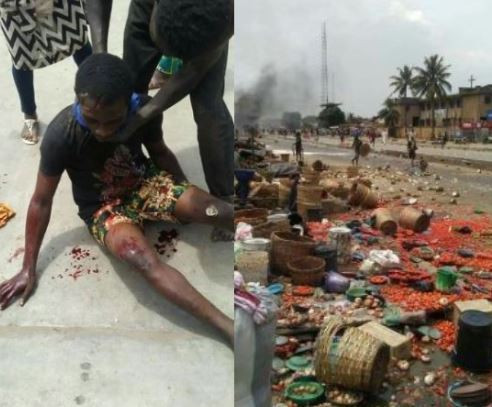 The police in Lagos state says it has arrested five suspects over the clash between scavengers and area boys at Oke Odo area of Lagos state on Sunday August 18th.

Narrating what led to the clash, the spokesperson of the command, Bala Elkana, in a statement released last night, said at about 10am, one Alhaji Adekunle Habib of Ilepo market reported at Oke Ode Police Station that there was a misunderstanding between one Hausa scavenger and an Area Boy from yoruba ethnic group.

The area boy was carrying some goods on his head and was pushed by the Hausa boy in error and the goods fell down. Arguments ensued between the two parties which led to exchange of blows. Friends of the two parties joined in solidarity fight and other miscreants took advantage of the moment to steal and loot. They blocked Lagos/Abeokuta express way What started as a fight between two miscreants almost snowballed into ethnic crises, if not for the timely intervention of the Police. Police teams from Oke Odo Division were the initial responders. The Command sent reinforcements from the Operations Department, Rapid Response Squads, Taskforce, Tactical Units and Police Mobile Force.  Divisions within the Area Command equally send reinforcements. The situation was brought under control and traffic cleared” Bala said.

He added that no death was recorded but four persons sustained various degrees of injuries and are receiving medical attention.

He said the suspects will be charged to Court. windI�X

How My Wife Convinced Me To Set Up ADRON Homes – ADRON Homes CEO, Aare ADETOLA EMMANUELKING