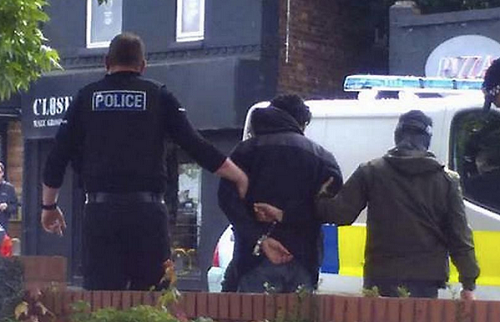 Following the Manchester bombing that occurred on Monday, May 22, 2017, the suspect has been arrested by metropolitan police, Manchester. The 23-year-old man was arrested by heavily armed cops outside a supermarket in connection with last night’s horrific attack.

Witnesses said masked officers swooped on the man outside Morrisons on Wilbraham Road in Chorlton, south Manchester this morning in the wake of the explosion that ripped through crowds at a packed Ariana Grande concert last night.

One witness shared a photograph of the arrest on Twitter, saying: “Black Merc full of non-uniform police in face masks just arrested someone outside Morrisons in #Chorlton”.

With regards to last night’s incident at the Manchester arena, we can confirm we have arrested a 23-year-old man in South Manchester.

Photographs show officers leading a man away from the scene, with the suspect in handcuffs.

Police confirmed they had arrested a 23-year-old man in South Manchester today, saying the arrest was linked to the targeted attack on crowds of concert-goers last night.