‘Police forced me to confess’, says man who killed girlfriend’s sister in Jos 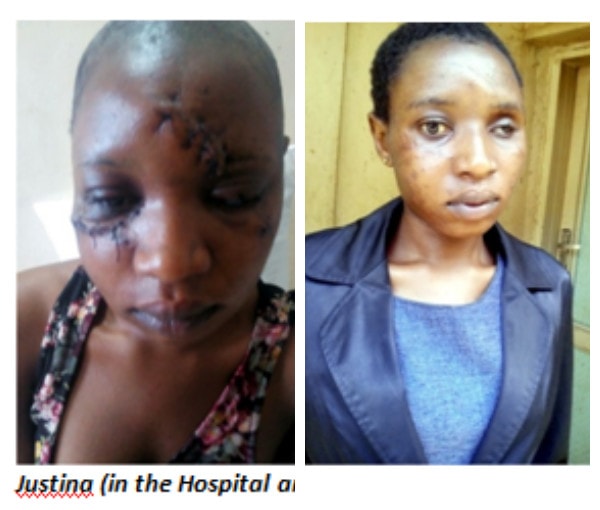 A suspect, Stephen Luka, who is standing trial for brutalising his ex-girlfriend and killing her sister, has told a Jos High Court that the police tortured him to obtain his confessional statement.

Giving evidence in a trial-within-trial on Tuesday in Jos, Luka rebutted the charges and showed the court scars he sustained during the torture to obtain his statement.

Stephen Luka was arraigned before the court in October 2016 charged with murder, attempted murder, assault and sexual abuse.

The defendant was alleged to have attacked two sisters Simi Dusu and Justina Dusu on July 27, 2016 at his home, in Sabon Gari, Tudun Wada, Jos, when they went to break the news that Justina was pregnant.

According to report, Luka was not happy when Justina insisted on keeping the baby, lost his control and used a machete on both sisters, resulting in Simi’s death and Justina losing her left eye.

The Divisional Crime Officer, Mr Bolaji Ayenumuro of the “A” Divisional police headquarters on May 6, testified and told the court that the accused person in a statement confessed to the murder without any duress.

Luka, led in evidence by his counsel, Mr David Adudu, told the court that the statement was forcefully taken from him on Aug. 2 and Aug. 3 2016, respectively.

“On Aug. 2, 2016 at about 8 p.m I was in the cell, when one Sgt. Apollos came to take me out and led me into the crime office where I met other policemen.

“They asked me if I committed the crime and I told them no. They immediately started to beat me but I still told them I did not do it, I was then taken back to my cell.

“At 7 p.m. the next day they took me back to the crime office and this time around they put a chain on my legs and placed hand cuffs on one hand.

“They started to torture me again, when I could no longer bear the pain, I told them I committed the crime, my statement was taken and was I forced to sign.”

During cross examination by the prosecuting counsel, Mrs Muleng Alex, the defendant said that it took the police three days to extract the statement from him.

When asked to identify the signature and date written on his statement, Luka said “this is not the statement and I cannot recognise the signature on it.”

The prosecutor prayed the court to allow the defendant to write a date on a piece of paper to ascertain whether the handwritings were the same.

However, when he did the two writing turned out to be the same.

The defense counsel, Mr David Adudu, thereafter prayed the court to give him 21 days to file a final written address for the defence.

The judge, Mrs Nafisa Musa, after listening to his plea, adjourned the matter to July 24 to enable both parties file their final written addresses for the trial within trial.

‘Police forced me to confess’, says man who killed girlfriend’s sister in Jos was last modified: June 6th, 2017 by Reporter

Good News? Scientist almost done with the stem cell to raise the dead