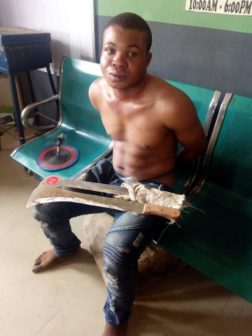 Police in Ogun State have arrested an apprentice, Okwudili Okoro, for killing his master Azubike Okoro and his wife, Jacinta Okoro at their home in Ijako.

The late Azubike was also the suspect’s elder brother.

A complainant identified as Joseph Nwagu reported the murder at Sango police division.

Nwagu told the police that Azuibike and his wife were hacked to death by the suspect and his accomplice, Kenneth who came all the way from Sapon in Abeokuta to commit the heinous crime.

The DPO Sango Division, SP Nasirudeen Oyedele led detectives to the scene of the murder where the suspect was arrested but his accomplice escaped.

A witness who preferred anonymity said: ”The suspect has served his elder brother for three years, and when it was time for him to settle him, Azubike kept on postponing the settlement.

“He stated that when he realized that his brother was not ready to settle him, he contracted one Kenneth who is still on the run and they bought two cutlasses, sharpened them and headed to his elder brother’s house in Ijako.

“On getting there, they met Azubike eating with his wife and before he could utter a word, they descended on them and macheted them to death.”

The two corpses have been taken to the general hospital Ota mortuary for post-mortem.

The state Commissioner of Police, Ahmed Iliyasu has ordered the immediate transfer of the suspect to the homicide section of the state criminal investigation and intelligence department for investigation.

He also directed his men to arrest the fleeing accomplice within the shortest possible time.