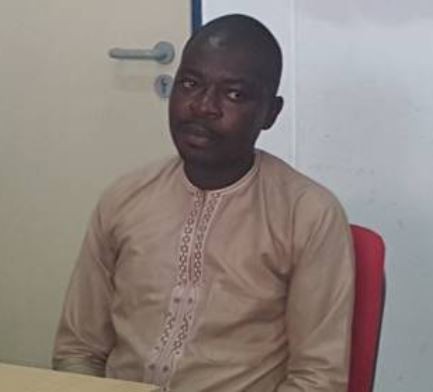 Ismail Yakubu has been found guilty of giving the false information that led to the raid of Edwin Clark’s home on Tuesday by the Nigerian Police.

Jimoh Moshood, the Force Public Relations Officer, who paraded the suspect, said Yakubu would be arraigned before a court, later today for giving false information to the Police. He addded that the four officers accused of carrying out the raid are still in Police custody, adding that the Inspector General of Police has ordered that the outcome of the preliminary investigation into the matter be made public.

He added that appropriate  disciplinary action will be taken against the officers.  While narrating how he got the information, the informant said he was in a taxi to meet a friend at Asokoro and a street leading to the Edwin Clark’s house was shut down, making vehicular movement difficult.

He explained that the driver of the cab pointed at the house that it belonged to Clark, and told him that a white hilux van in front of the house was carrying ammunition. HIn his words: “The whole street was blocked; no way in, no way out. So, I asked questions and it was the taxi driver that told me that this is the area Niger Delta people live. He then pointed to a truck entering the compound at the time. I checked the compound and discovered it is House 43. It was a white Hilux and it was sealed. The driver told me that the Hilux was full of ammunition, and I said ‘what!’ As an indigene of FCT, we are peace-loving people. I couldn’t take that and that is what I said. I asked him if he was sure of the information.”

The names of the officers found culpable were given as ASP David Dominic; Inspr Godwin Musa; Inspr Sada Abubakar, and Inspr Yabo Paul. Moshood stated that “Notwithstanding, the fact that on a daily basis, the Nigeria Police Force across the country receives information from members of the public which are promptly used to prevent and detect crimes and criminalities, the force will not condone misconduct by any of its personnel that run contrary to the rule of law”.