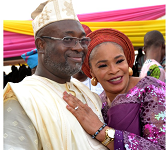 •Steps Out With Husband In Style At ABEOKUTA

Veteran actress, Remilekun Oshodi, popularly known as Remi Surutu is one of the screen divas whose creativity and originality has stood the test of time.  Many wondered how she got her stage name Remi Surutu back then. We can tell you she got the name after acting in the movie titled Surutu.  She has been acting from way back in 1985 and she has featured in so many movies that she has lost count. She has acted in several series that includes Spark, Telly movie, The village Headmaster to mention a few, but the movie SURUTU by Afolabi Ogunjobi brought her to the lime light.

This gorgeous beauty from Ondo and Lagos State celebrates her birthday every 14th of May but this year took a new turn. She turned 50 and it is amazing that she looks much younger than her age. Golden Jubilee is one of the most celebrated years and she indeed celebrated with beautiful photo shoot on her social media platforms. Little did she know that a lot was planned for her until she got several surprise parties from her daughter, fans and loved ones. Not so much has been heard about her love life until recently when she was proposed to on her birthday. It was a double celebration because she did not just turn 50 but also got an engagement from the love of her life.

The news of her Engagement broke the internet few days after her birthday when one of the leading fashion designer ceolumineeofficials hared a video on her instagram handle. In the video, Remi Surutu was seen dancing in a luxury lace made by ceoluminee and while dancing ceeoluminee broke the news in appreciation to God. Remi Surutu expressed her shock at the act, feeling exposed but did not fail to continue dancing. It was so obvious that she has found Love again and she is happy.

ceeluminee wrote this “ Let me quickly do Aproko(Amebo) of my sister, Ife mi @therealremisurutu. She got engaged on her birthday few days ago. She told me not to tell anyone but I can’t keep calm because we have been praying for this so long and it shall be permanent in Jesus name. I present to you the love of my heart you are one in millions.#EGBON MI ALAYE IRE, I celebrate you and your family today”. The trending video as at the time of compiling this report had 98,333 views and 797 comments. One of the leading actresses Adunniadde commented and wrote…..awwwh Aunty @therealremisurutu congratulations. “Her fans are super excited about the news and they gave shout outs and congratulatory messages to her.

The news of Engagement trended but it was not made public who she was engaged to. On Saturday 17th May 2019 she stepped out in grand style for her heart throb Prince Olasunkanmi Oyeyemi popularly known as Sunky. These two love birds were seen in each other’s arms at different times and the chemistry between them was so strong and obvious. They were seen taking pictures and teasing each other as they attended to their guest. Their joy knew no bonds and it was visible. Remi Surutu was busy flaunting her engagement ring in most of the pictures.

Known for her great Fashion sense, Remi Surutu stole the show at the party with her gorgeous and hot look. Her designer ceelumineeofficial is one of best in Nigeria and she styled her outfits. She was the cynosure of eyes as she stepped in the Aso-Ebi for the family members of Oyeyemi . She played her role as a good wife as she attended to the guest. She was sighted exchanging pleasantries with the families of Prince Olasunkanmi Oyeyemi. On her table were nollywood stars like Fathia Balogun Williams, Bukky Adeeyo, Folorunsho Adeola, Baba Tee, to mention but a few.

The guest Artiste for the Event Yinka Ayefele MON is one of the leading Gospel artistes in Nigeria and also the chief Executive Officer of Fresh fm in Abeokuta and Ibadan. Yinka Ayefele kept on singing the praises of Remi surutu. She joined her prince on the dance floor in company of Fathia Williams and some other Nollywood Stars.

The event took another look when she stepped out in her second appearance which was a luxurious lace worn by the siblings of Prince Olasunkanmi Oyeyemi. She looked as beautiful as ever in the second attire and Prince Olasunkanmi could not even take his eyes off her. Her beau who is also a top socialite and a fashion lover dressed in a well-designed cream Agbada. The event is over but the memories still linger. The fans still want to see more of her on the screen and hope that her new engagement will not keep her far from her first love which is acting.Our prayer is that the union will last and be a blessing to both parties. fV[��Y�