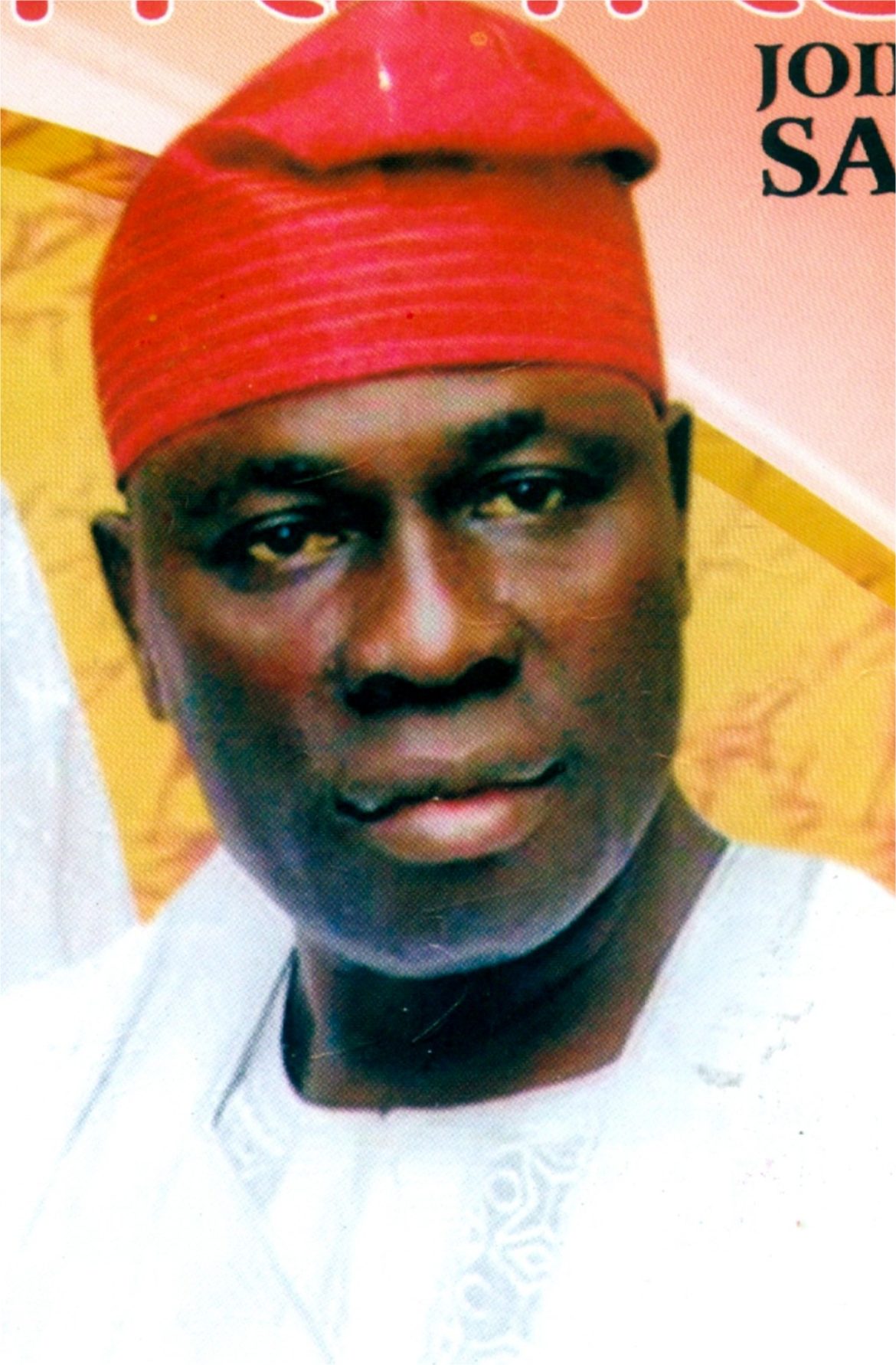 •Details Of The 2 Day Burial Rites In EKITI

Friday, January 31st and Saturday, February 1st, 2020, will forever remain remarkable days for the entire family of OMOTOSHO, as their brother, father and grandfather the late Elder Felix Omobulejo Omotosho a.k.a Aburi the tailor was finally laid to rest in his hometown, Itapa Ekiti, reception and entertainment of guests was held at Ado Ekiti, Ekiti State.

The late Elder Felix Omotosho after lost the battle to death on the 21st October 2019 during a brief illness. Undoubtedly, he lived a very fulfilled life. Many of his goodwill speaks from him among the family members in his hometown, Itapa Ekiti and in Ado Ekiti where he lived before his demise. He has left his footprints on the sand of time. Though he was survived by a wife, children, grandchildren, friends, cousins, and siblings but according to his first son, Odunayo, his memory will continue to linger on. “I am still in shock and cannot comprehend why my father, my daddy, my papa never said goodbye before leaving me. You may seem gone, but you are never gone. You thought me a lot about life. You were fond of telling me stories about your life, how you were born into a very large polygamous family, how you lost your mum at around age 4 and your dad at age 20 tells a story. You practically lived on your own with no help from anyone, but God.

Despite the disadvantages you had growing up, you carved a niche for yourself in this life by carrying out everything that a good man, friend, brother, amazing husband, great father, and great grandfather should do. I have never seen a man who called all his children twice a day, home and abroad. If you called me for 5 minutes, 3 minutes of it would be for prayers (what a warrior I have lost)- God, please grant me such grace. You became a household name in the tailoring world in Ekiti – “Aburi the Tailor”. I didn’t see you do any other business but tailoring and yet you fulfilled your destiny well. You did all you could to get us educated, you put a roof on our head and most importantly you were always there for us in prayers, to the extent that we nicknamed you “Baba Kristiani”. God carefully chose you for me as a father. Your memories are ever fresh, and your teachings are still very new. You introduced me to music. As a die-hard fan of King Sunny Ade (KSA), you always took me with you to his party. Never would you go to watch football without Odunayo. You were my football gist-partner and my ever-loyal political analyst. My father knew what was happening around me, so much that he was my NTA.

I thank you for the scolding, the punishment, the guidance and the advice because they made me and still are making me. A sweet disciplinarian who would never compromise on excellence. He instilled so much discipline in us that you would always remember him if you feel like misbehaving. He taught me more than just simple thing about life. He taught me so much about life. He showed me how to really fight and battle adversity and to never back down. I can never but recall the encouraging and morale booster you were always giving me. Daddy mi. like I always call you, no word can express how I feel right now. You have left a vacuum that no one can fill but God. I promise I will forever represent you well, which you have always advocated, I will keep the Omotoso’s flag flying all the time and I will forever protect your interests. Please hearken to his from my weeping heart: “A special dad is hard to find. You Dad, I’m keeping in my mind. I wished you could have stayed forever, but I will never forget you; oh! not ever. If your dreams weren’t dreams and dreams come true, I wouldn’t be here; I’d be with you. “Distance is one thing that keeps us apart, but, Dad, you will always remain in my heart. A special smile, a special face,  a special someone I can’t replace, I love you and I always will. You filled a space that no one else could fill” My dear Father, you have always been my inspiration and you shall always be. Dying wasn’t your choice likewise allowing you to die wasn’t ours. My heart aches to know that you are gone but I take comfort in knowing that you are now resting in the bosom of the Lord. I love you dad and will always do.

The final burial ceremony of the late Elder Felix Omobulejo Omotosho will be regarded as a one in town. Odunayo and his siblings spent big to make the days memorable. Or how best could one describe a final burial that was held for 2 days in 2 different towns; the deceased’s hometown, Itapa Ekiti, and in Ado Ekiti where he resided before he bade the world farewell.

AT ITAPA EKITI FOR  BURIAL SERVICE

The sleepy town of Itapa Ekiti in Ekiti State came alive on January 31st, 2020 as the remains of the late Elder Felix Omotosho was brought home for its final rest. Words cannot describe how the whole town, family, members, friends and well-wishers came out en mass to receive the children and the remains of the late Elder Felix Omotosho. The interment was done before the church service commenced in compliance with C.A.C’s rites so, his remains were finally laid to rest at his new site within the town.

The church, Christ Apostolic Church Olorunsogo, Itapa was filled to the brim. Guests who sat outside tripled the number of those inside the church auditorium. They all came out to bid Aburi the tailor farewell. The service commenced few minute’s past noon. It was officiated by ministers on the ground, followed by the family’s thanksgiving before the service was brought to a close.

You need no one to tell you that the late Elder Felix Omotosho was a very active elder in his hometown church. Over 15 ministers were on the ground on the day. Many of them in the course of ministration testified that the deceased was a very devoted Christian in his lifetime. Among the ministers who were present are; Pastor T. A. Ogbegudu- Ekiti DCC Sup, Pastor S.O David- Blessing Zonal Sup, Pastor R.B. Adaramoye-Idolofin Zonal Sup, Pastor J. Joseph- Itapa Dist. Sup (Host), Pastor Ademola, Pastor Osho Bukola, Pastor T. Ilugbusi, Evang. Oni, Evang. Ogundipe, Evang. O. Felix and many others.

Seeing them beautifully dressed with their measuring tape, on their necks and shoulders easily gave them out. Many of them testified to the impact and input of late the Elder Omotosho in the Association. Hardly will you see any fashion designer who does not pass through his tutelage in the whole of Ekiti. Mention Aburi the Tailor, you are surely talking about a man of integrity who was loved by many.

AND THE BURIAL SERVICE RECEPTION FOLLOWED

The reception for the burial service was held in the same compound within enough the church auditorium. Many canopies were erected outside, beautifully decorated. There were food and drinks for everyone, especially the indigenes. There was a live band that made the event worthwhile. Omotosho’s family were called one after the other to dance before the first son, Odunayo and his friends with few family members left for Ado-Ekiti in preparation of the following day final burial ceremony.

AT THE FINAL BURIAL CEREMONY IN ADO EKITI

It is the joy and prayer of every child to give beloved, aged parents a very befitting burial when they are gone. Odunayo and his siblings really gave their late father, the late Elder Felix Omotosho, a befitting burial he deserves. The final ceremony on the 2nd day in Ado Ekiti could be classified as a top-notch, classy event. it was held at the popular Damlek Hall at Oke Ila, Ado Ekiti. The beautiful hall seated nothing less than 1500 guests. Over 80% of the guests dazzled in the Ankara Aso-Ebi. With a professional singer on the bandstand and a popular comedian, Ayo Ajewole a.k.a Woli Agba as the MC of the day, you sure could tell how grand the event was.

The late Elder Felix Omobulejo Dada Omotoso was born on February 2, 1948, to Chief Adubiroro Asorogunbioke Ornotoso, a trado-medical practitioner from  Okeoro compound, Itapa Ekiti; and Mrs Jokotola Omotoso (nee Osho), a successful kolanut trader from Ilore compound, Itapa Ekiti. He was one of several children born to his father, but his mother’s only child. He, however, lost his mum at the young of age of four and his father died when he was about twenty (20) years old.

Baba began his primary education at Methodist Primary School, Itapa Ekiti, but unfortunately had to leave school because of his father’s intense love. His father insisted that he should drop out of school because he could not do without seeing his face every time as he was his mother’s only child whom he lost very early. Post-school, he took up farming with his father and they were together all the time.

As he grew older, he took up basket-weaving alongside farming and became the best basket-weaver among his peers at Itapa. After losing his father, he became lonely and decided to quit farming as it was no longer fun for him. His maternal grandmother took him to Ado-Ekiti to learn and become a driver, but he opted to become a fashion designer. He started by learning how to make traditional attire and practised it for a few years before going back to learn how to make modern outfits.

He met his wife, Florence Aina Omotoso (nee Farotimi) also, a fashion designer in 1973 and together they had five (5) children; Odunayo, Fisayo, Modupe, Omolara, and Busuyi.

He was Baptised at Christ Apostolic Church (CAC) Olorunsogo, Itapa Ekiti on December 24, 1973, and eventually became an elder at the same church on 28th October 2007.

Elder Felix Omobulejo Omotoso lived a great life against all odds and rose to become one of the most renowned fashion designers in Ado-Ekiti-Aburi the Tailor. As a father, he was the best one could have, such that he was always there for his children and always ready to help. He would make it a duty to call his children every day up until his death. He was a great disciplinarian, who never tolerated laziness, indiscipline and disrespect. Since he was disadvantaged on education, he was determined to make sure every one of his children was educated. As a husband, he was such a loving man that he became a twin to his wife. As a grandfather, he was out of this world. He was fond of taking a walk with his grandchildren at the slightest opportunities. As a friend, the condolence register would make one cry endlessly as friends wrote epic stories about him. He was so fashionable that most people did not know that he was a tailor (Fashion designer).

He was a highly dedicated Christian who would spend all his morning and night praying. Even on a sickbed in hospital, he was still observing some level of fasting and prayers.