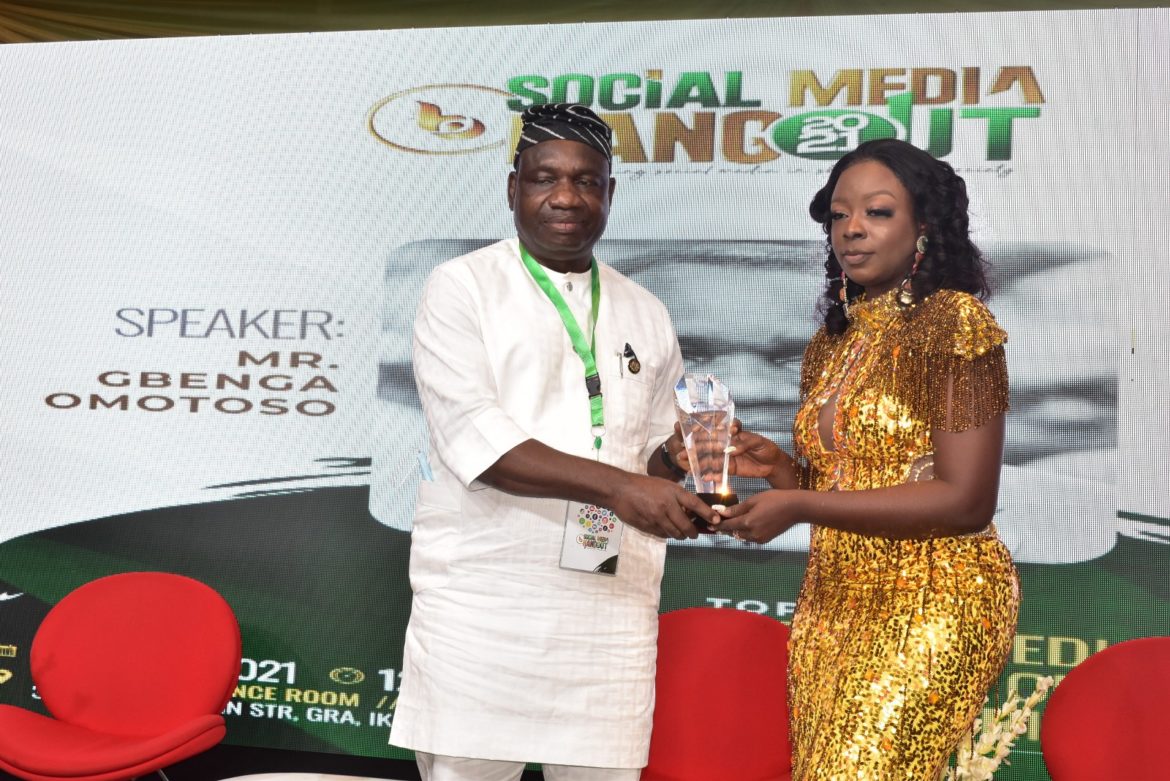 Major stake holders converged in Lagos a few days ago for this year’s Social Media Hangout.The event was held on Sunday 6th June,2021at Radisson Blue,Ikeja GRA in Lagos. The initiator & CEO of Bodex Media, Florence Hungbo has described the platform as a unique talk media show that was designed to create consistent awareness on the abuse of social media and the practical solution to curb fake news.

Bodex Social Media Hangout has tremendously impacted many people’s lives especially youths,as she always comes up with educative and interactive topics,like the theme of this year,which is Digital Media: Freedom of internet use and the rights of the citizens.

Youths, celebrities,media practitioners,and politicians graced the event.During the course of the event,she gave Awards to some of the Keynote speakers,panelists,media houses, politicians,that have supported her all through the journey and also to some of her fans that love her whole -heartedly.

The educative event started with an opening prayer after which came the recitation of National Anthem by Augustina Chinyere Ogunlana.The event was beautifully compered by TV talk show presenter /MC Nnamdi Chukwu,who invited all the dignitaries,speakers,guest to the high table,before the welcome address was delivered by Florence Bodex Hungbo(Convener,Bodex Social Media Hangout).

At about 2.15pm,the Convener was ushered in with a standing ovation,and she thrilled her guest/fans with her wonderful dance steps.

Then came the Ewi Performance by Jimoh Abimbola Hannat.

There were gift presentations to the Speaker and the Panelists after the session.

Lunch was served and
Performance was by Lotto Banks & Segun Brown

The first set of awards of The most friendly man of the year was given to the governor of Lagos State, Mr Babajide Sanwo-Olu, represented by Mr Gbenga Omotoso.

According to
Florence Bodex Hungbo,
whether you are a content creator,a TV presenter,Radio, host, digital marketer,print.we are all trying to create a platform where all of us can come together to co -exist,learn and then have fun.It is also about copying,pasting,publishin.It is time to just let go of all those busy time,where we can also have our leaders to come and tell us about their manifesto,the things they intend to do and more.It is not a political brand,but, a platform for media personalities ,where other stake holders can come together and tell us what we are doing that they dont like,instead of you disrespecting us just because of brown envelope.We are news makers and news breakers.We can make you and we can also unmake you.So tell us how you want us to be better and we take it up “

So what is her view on this year’s social media hangout,with the theme: ‘Digital Media: Freedom of internet use and the right of citizens’.

on the issue of Twitter ban .”Point of correction,the Federal government said,they suspended twitter temporarily,and not ban it.I have granted 5 interviews before now.i have been a journalist for over 30 years,it is my 1st time in government.
We can use technology for empowerment. Technology is a tool that we can use wisely.

Actor,Yemi Solade also spoke to Citypeople He said,Social Media has its own negative and positive sides , as well.Maybe because i am old,when i started acting in 1977,there was no social media,but,now with the use of social media we can spread our work/film through social media to make it go viral Infact,as an actor,the producer stylishly use us as a markerter.After every film production,the producer will say,please,help us share on your social media handles.
In another angle,social media as damaged alot of relationships,where you will see a picture of a girl who lives in Sango and she will not mind to go as far as Ikeja Mall to take a photograph and post on her page and any man or anyone will say wow,this girl is pretty. (laughs).At the end of the day,seeing the girl,one on one,you will be disappointed at what you will see.
Same way,hackers can be something else.My daughter’s IG account was hacked.
I use social media to correct the wrongs people have said about me.”

IFY ONYENGBULE,a Radio Broadcaster,also spoke. According to her,
Government has to be open.”Let the people know what you are doing.Once the people know what you are doing,there will not be time for fake news.That is what is called accountability,being accountable to the people.Once the people understand what you are doing,fake news will not thrive.”
“Then again i will also like to say if we keep blaming the government,then,you are exonerating the people,which shouldn’t be the case.You and i are the government.”
“Some of the things we share on social media are capable of tearing this country apart.
What do you stand to gain if the message you pass across/ share brings the country down.
We have to be careful about what we pass across to the world.”
“We need to understand the word selfcensorship.
The word selfcensorship is what we put out to the world.
Selfcensor is when you get a news/report,verify it very well,pass it across and check with people who know, before you go ahead to press that botton to share or even copy and paste.”

Popular Comedian Debo Adedayo (Mr Macaroni) also spoke.”Governance has to do with structure,any body can lead,be you a governor,be you the president.It is the person’s right to lead.We are talking about the new age.I can just pick up my phone and Tweet from my house and it goes viral.Why should i wait for government?
Bodex, i believe is a prophet .The theme of this year’s Social Media Hangout is (‘Digital Media:Freedom of Internet use and the right of citizens).Now we are dealing with the issue of why must government ban Twitter.Government officials send their kids abroad,yet they dont have good things to offer to common Nigerians We have over 33 million plus who are active social media users in Nigeria.They dont want to know how useful social media is to some people.Today people know Mr Macaroni because of social media.I have
I will continue to use my voice to preach peace,and unity. Government is answerable to me.They all use police.Police also have their families.Insecurity in Nigeria is alarming.People are being kidnapped every day.Now,you ban twitter,you are gradually moving to other social media handles.Now people dont even want to talk again, because,if they talk,they get victimised.