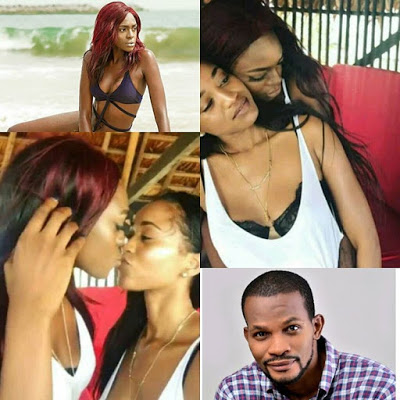 The racy photos of Beverly Osu and her acclaimed partner kissing have generated controversy that questions the sexual orientation of Beverly. Some bloggers have already tagged her lesbian. As the rumour develops, social media writer Uche Maduagwu has advised Beverly to keep her sexual prowess as a private act.

Shame! Shame!! Shame!!! The kind of “pikins” born nowadays are a complete mistake. They are generations of wastefulness.

I understand that some of our celebrities were molested at tender ages, I feel so sad about that because I am against child molestation. In fact, I believe anyone who molests a child should be locked up in a maximum prison for at least 200 Years with hard labor.

But let us face the fact, just because your Uncle sexually molested you when you were a little child doesn’t mean you should turn yourself into something else. I understand the trauma and pains, the agony of being abused.

I understand the physical, psychological and emotional pains that a young girl goes through, but becoming a lesbian in broad day light is not something a good woman should indulge in.

I know most of our female celebs struggle with lesbianism, it’s like a secret habit many of them have been trying to come out of but can’t. We are Africans, let us behave like one and not behave like imbeciles, the funny thing is that even the lower animals don’t practice this devilish act, a female dog will always mate with a male dog, same goes for Pigs, goats just to mention but a few…

But its crazy that grown up female adults stoop so low as to sleeping and mating with each other. Please if you have no shame, remember you have so many kids looking up to you as their role models.

Practice your lesbianism indoors, and stop advertising your foolishness in public. Anyways, i will be having series of prayer sessions for your soul, because you are a beautiful woman with so much potentials, but if you allow the devil to steal away your grace, you will be miserable for a very long time