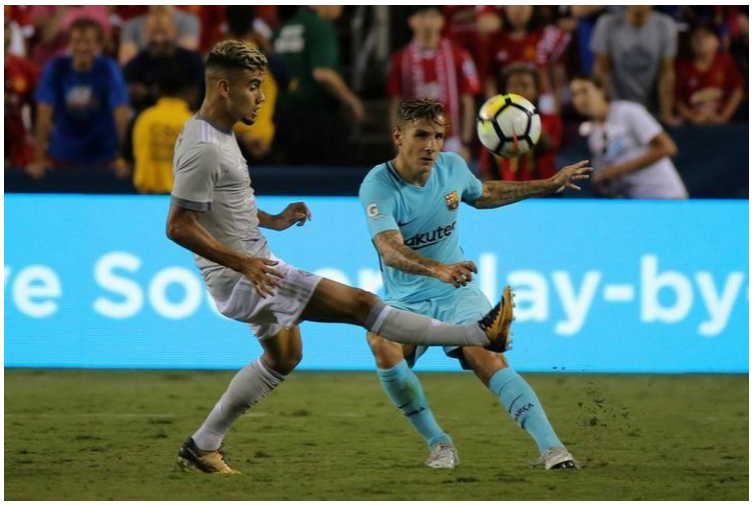 Manchester United manager Jose Mourinho has claimed was satisfied with his team’s overall performance and fitness level ahead of the new season despite ending their pre-season tour of the United States with a defeat to Barcelona.
Barcelona got the only goal of the encounter in the first-half when Neymar capitalised on United full back Antonio Valencia’s mistake in the 31st minute to score from close range.
The Spanish side were in control during the first half but failed to extend their lead with United goalkeeper David de Gea forced to make six saves to keep his side in the match.
Anthony Martial, Paul Pogba and Andreas Pereira had their chances on goal to equalise for United in the second half but failed to test Barcelona stopper Jasper Cillessen.
United’s defeat at the FedexField was their first in their pre-season campaign.
“It’s very important to lose a match in pre-season,” Mourinho told reporters after the match.
“I think it would be very bad for us to leave the U.S. without a defeat, playing against teams like Real Madrid, Barcelona, Manchester City, it would be very bad to go home with just victories.
“I think in the game we did some very good things and we did bad things. The very good things are to keep and the bad things are to improve.”
Mourinho was particularly impressed with another solid display from midfielder Paul Pogba, who the Portuguese manager believes is among the best players in the world.
“(Lionel) Messi and Neymar, there is only one; there is not two. (Luis) Suarez, (Andres) Iniesta, (Gerard) Pique, (Cristiano) Ronaldo, (Gareth) Bale, (Luka) Modric, Toni Kroos; there is only one so they can only play for one club, not for two clubs,” said Mourinho.
“We can’t have them, they belong to the clubs. But I have to say that Paul Pogba showed the level… he showed he belongs to that level.”
The United manager also confirmed midfielders Juan Mata and Ander Herrera will resume training when they return to Manchester on Saturday.
Mourinho’s side will next visit Norwegian side Valerenga on Sunday before facing Italian Serie A team Sampdoria in their final pre-season match in Dublin on Wednesday.
They kick off their competitive campaign with a UEFA Super Cup meeting with Real Madrid on Aug. 8 in Skopje.

SEE ALSO: ELBOW INJURY RULES DJOKOVIC OUT OF TENNIS TILL…