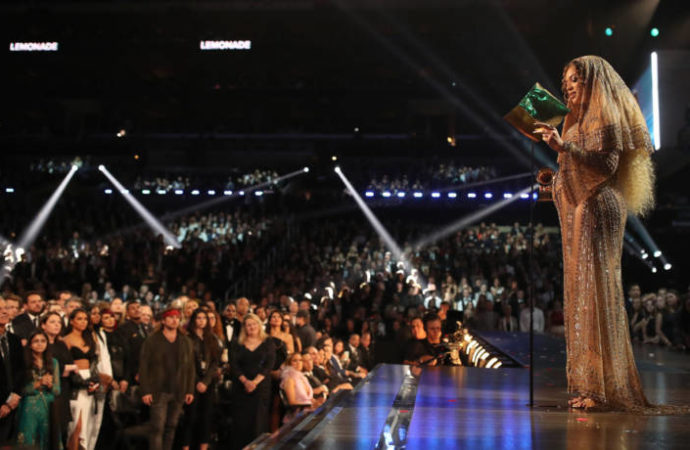 Beyonce made her performance debut as the expecting mother of twins on Sunday with a New Age celebration of women at the Grammy Awards.

The pop superstar, who leads the night’s nominations, appeared for the first time in public since she set the internet ablaze with news that she is pregnant.

Beyonce chose not to play it safe, instead of putting on an extravagant and abstract performance with touches of Indian spirituality and ancient Egypt.

Beyonce was introduced by her proud mother before an image of the 35-year-old singer, her baby bump openly visible under her bra, flashed on the screen. She was also shown with her mother and daughter Blue Ivy, all in gold.

The real Beyonce then appeared wearing a golden crown and flowing cape alongside dozens of female dancers, who made formations around her as they turned the stage into a sea of flowers.

Beyonce sang two songs from her latest album, “Love Drought” and “Sandcastles,” interspersed with spoken word incantations on women and their power.

“If we are going to heal, let it be glorious,” Beyonce said.

She ended the performance with a glance down to her husband, rap mogul Jay Z and Blue Ivy, both of them beaming.

The performance was in keeping with the new, edgier persona of Beyonce, who has geared her music away from the more mainstream audience of her pop hits.

She was nominated for nine Grammys including the most prestigious category of Album of the Year for “Lemonade.”

Facebook must do more against hate speech – Italian official