Home Media President Buhari s well, those around him told me so- Femi Adesina
MediaNews

President Buhari s well, those around him told me so- Femi Adesina 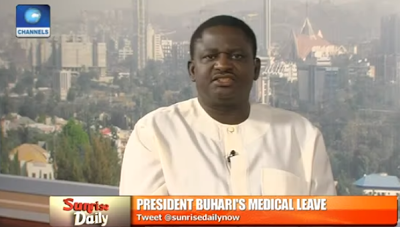 Senior Special Assistant to President Buhari on Media and Publicity, Femi Adesina says he is not directly in touch with the president but that he speaks with those around him in London. Adesina said this on Channels TV this morning.

“Daily. I am not saying I speak with him directly but I am in touch with London daily. People around him, we speak daily”he said

“You can’t compare the Yar’Adua scenario/saga with what is happening now. Then you could ask for daily updates because the President left the country without anybody been told where he was headed and why he was going there. Two, he did not transfer power to his then deputy, the Vice President. That is not the situation now. When the President was leaving on January 19th, we issued a statement. He was going on vacation and he would do routine medical checkups. Now when those medical checkups need to be extended, we also announced it that because he needed to still do more and get the results, he has asked for an extension. and then three, power has been transferred to the Vice President who is the Acting President”he said

President Buhari s well, those around him told me so- Femi Adesina was last modified: February 7th, 2017 by Reporter