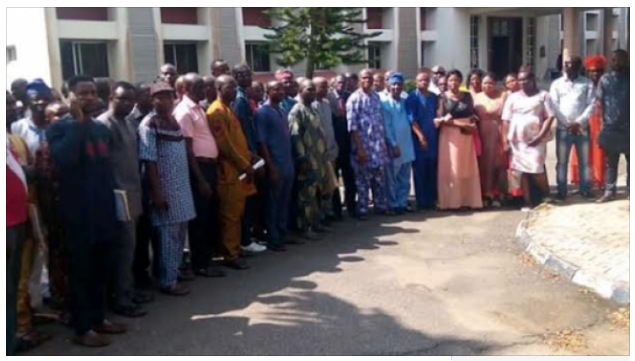 Not less than one hundred aggrieved aspirants of the All Progressives Congress (APC) have dragged Adams Oshiomhole, national chairman of the party, to the federal high court, Akure over the primary elections in Ondo state.

The house of representatives and state assembly aspirants were led by a former speaker of the state house of assembly, Kenneth Olawale.

Through their counsel, Wale Omotoso, they asked the court to declare that the ruling APC does not have candidates for the national and state assembly elections in the state.

They said the APC violated the 2010 Electoral Act and the constitution of the country by presenting candidates for the forthcoming elections without the conduct of party primaries.

The aggrieved aspirants asked for a “declaration that the subversion of the electoral guidelines of the APC as stipulated in its constitution by the party machinery in Ondo State in respect of the House of Representatives and House of Assembly primaries purportedly conducted on the 5th of October, 2018 in their failure to give the claimants opportunity of being voted for by the members of the party as enshrined in the constitution of the Federal Republic of Nigeria, 1999 as amended is illegal, invalid, unconstitutional, null and void.

“A declaration that the hand picking of preferred candidates without conducting any primary election in any of the ward and constituency in Ondo State with non-presence of any officials of INEC and members of the National Electoral Committee of the party amounting to pre-arranged choice of candidates is illegal, contrary to the electoral guidelines of the APC and the express provisions of the Electoral Act 2010, as amended in 2015.

“A declaration that the harassment, molestation, and intimidation of the claimants in their various wards leading to their being forcibly chased sway and embarrassed from all venues designed for the purpose of the primary elections with machetes and Dane guns by the hired thugs and hoodlums of the preferred candidates thereby ensuring that no primary election was held, amount to gross flagrant breach of electoral guideline of the APC and the express provisions of the Electoral Act 2010, as amended in 2015.”

The aspirants prayed for an order voiding the attempt by the electoral committee to send names to INEC.

The presiding judge, FA Olubanjo, ordered that all the defendants must be served before the hearing could begin, adjourning the case to November 12.