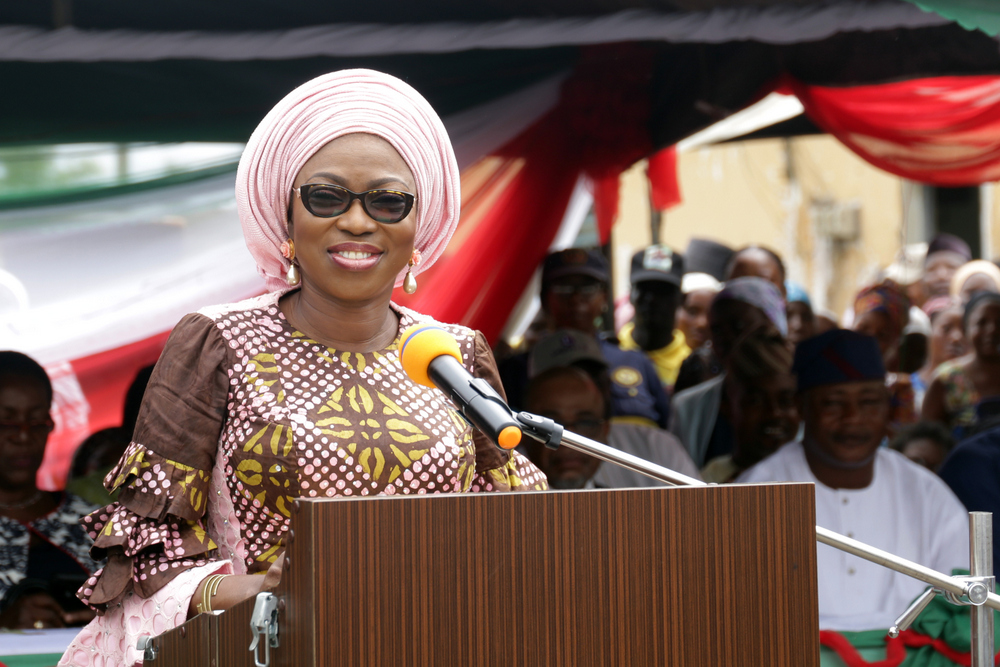 …Renews call for immunization of children

Wife of the Governor of Lagos State, Bolanle Ambode, has restated her call on pregnant women in the state, to patronize government health facilities for safe delivery and to always immunize their children against killer diseases.

She made the call at the annual celebration of the first baby of the year in Lagos State, at the Island Maternity Hospital, Lagos Island on Tuesday.

Mrs Ambode said the huge government expenditure on infant and maternal health infrastructure, could only be justified by commensurate use of the modern facilities, by the women, their babies and the children.

Shenoted further that government’s efforts at stemming maternal and infantmortality would be slow in materialising, if expectant mothers did not go tothe centres to use the facilities.

According to her, “I wish to note that Lagos State Government has continued to strengthen the health sector with the provision of neo-natal care units, equipment and resources to our state hospitals, to enhance the quality of maternal and child care services in our state.

‘The workers in the PHCs and General Hospitals are committed and determined to provide quality care, but you have to go there and use the facilities. Mother and Child Centres are also being located in nearly every neighbourhood of the state, for excellent infant and maternal health care delivery.”

the need for immunization, she said: “My passionate appeal to mothers, therefore, is to ensure they complete the full course of immunization for their children, to prevent childhood killers like measles, diarrhoea, pneumonia, tuberculosis, tetanus and hepatitis, to mention a few. In addition, parents must avoid the use of contaminated water, malnutrition and poor sanitation, as they also contribute to childhood mortality.”

She urged expectant mothers to maintain good hygiene and health-promoting lifestyle in pregnancy, to ensure the well-being of their expected babies.

He said with the planned implementation of the Lagos State Health Insurance Scheme this year,  more Lagosians would have access to improved services and enjoy the kind of care they would have been unable to before now.

Idris assured that the state government would continue to stimulate the required quality of health service delivery that is poised to address existing health gaps and even new challenges that might emerge in the future.

Emphasising that the health insurance scheme was compulsory, the commissioner disclosed that 5,000 private healthcare providers had been registered for the scheme to complement government’s efforts.

He added that once the scheme was implemented, Lagosians could choose which providers they wanted use, noting that the cost of providing healthcare had been significantly made affordable under the scheme.

Idrisalso disclosed that government would bore the cost of the less privileged onesin the society, disclosing that to this effect, government had enrolled 25,000less privileged people at Makoko area of Lagos to benefit from the scheme.

Also speaking at Randle General Hospital, Surulere where another babies were presented with gifts, Special Adviser to the Governor on Primary Healthcare, Dr. Femi Onanuga, said as part of the drive to improve access to healthcare services, the State began the renovation of Primary Health Centres, PHCs across the state to meet with the growing demand for healthcare in various Local Governments and Local Council Development Areas, as over 40 PHCs were renovated in 2017 alone.

“This is geared at promoting health and reducing the burden of diseases that hamper economic and social relevance.

“We are committed in our quest to reducing maternal mortality rates and neonatal/infant mortality by ensuring the availability of maternal and child services, skilled workforce and promoting partnerships with the Private Sector, locally and internationally,” he said.

Onanuga also enjoined all Lagosians to take advantage of the health insurance scheme and the benefit it would provide the enrollees, including financial protection in the event of medical incident.

However, at Somolu General Hospital, a baby born to Mr and Mrs Awofeso at exactly 1:47am, weighing 3kg was presented with gifts by Mrs Ambode.

Also born at the hospital was a girl to the family of Mr and Mrs Adams at exactly 4:00am, weighing 2.7kg.

Asst. Director Public Affairs
Office of the Wife of the Governor of Lagos State

‘Procreation Is Divine, No Mother Deserves To Die In The Process’ – Mrs Bolanle Ambode was last modified: January 1st, 2019 by Reporter