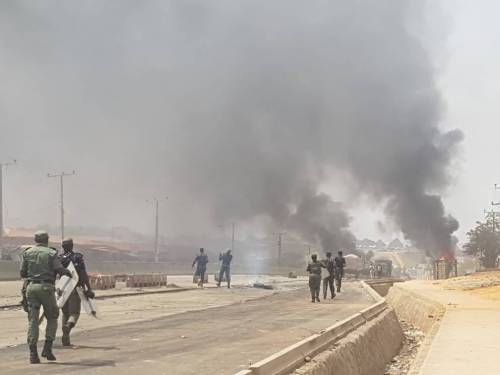 Several buildings and cars have been destroyed in Ikare Akoko community as rival youths clashed over alleged attempts by Chief Idowu Ogunye to continue to act as Olokoja of Okoja, Ikare-Akoko.

Chief Ogunye was dethroned for absenteeism, disloyalty and refusal to obey directive of the Olukare of Ikare, Oba Akadiri Saliu Momoh.

The Ikare monarch relieved the appointment of Chief Ogunye with effect from January 20th, 2021 and cautioned him to stop parading himself as Olokoja of Okoja.

But Chief Ogunye courted the trouble of the Olukare by being loyal to a rival monarch in Ikare-Akoko, the Owa Ale of Ikare.

He had through his lawyer, Barr Femi Emodamori, insisted he remained the Olokoja of Okoja and described his suspension and purported expulsion as illegal and strange to the tradition of Ikare Akoko.

Ogunye had stated he was one of the Kingmakers that participated in the selection of the new Owa-Ale of Ikare Akoko even though he has been suspended since 2018 by Oba Momoh.

Crisis erupted in Ikare Akoko on Monday evening when the supposed dethroned Olokoja summoned a meeting.

The meeting was resisted by those loyal to the Olukare and gunshots erupted.

Nobody was said to have been injured in the melee but vehicles and buildings of both factions were destroyed.

As at press time, sources said gunshots were still being fired despite the presence of security personnel.

Ondo Police spokesman, ASP Tee Leo Ikoro, who confirmed the incident, said nobody has been killed in Ikare since Monday when the crisis started.

Ikoro said heavy security personnel has been deployed to strategic locations in the town.

Properties Worth Millions Destroyed As Crisis Rock Ikare-Akoko was last modified: May 4th, 2021 by City People

10 Places Not To Buy Land In IBEJU-LEKKI