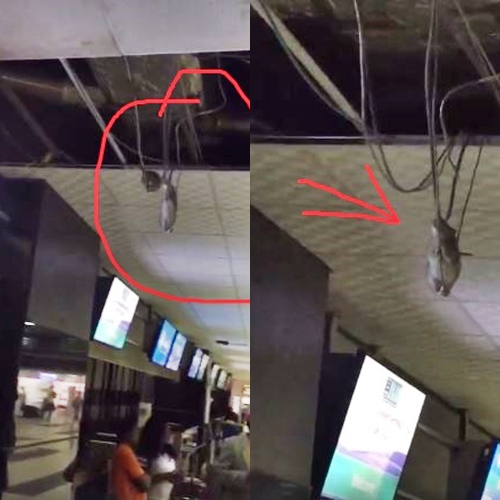 Two huge rats were recently spotted hanging from the ceiling at Murtala Muhammed International Airport in Lagos state in yet another national embarrassment.

Photos and video clip which emerged online and are making rounds on social media, show how two huge rats were filmed hanging from the ceiling at popular Murtala Muhammed International Airport in Lagos state.
The rodents which were still alive as at the time they were spotted were filmed swinging from electric wires at the check-in counters. The bizarre moment was captured on camera and posted online with the caption: “This is our Murtala International Airport with rats waiting to collect their boarding passes. I thought the Airport was recently refurbished. First, it was leaking now infested by rats.
“I hope God is not mad at us as a Nation and has totally washed His hand off our case. Can someone tell me which way forward with Nigeria before I totally go crazy.”
watch video:

Rats Hanging from the Ceiling at Lagos Int’l Airport (Video) was last modified: July 24th, 2017 by Arinze Ago

5 Apps That Can Keep You Company...