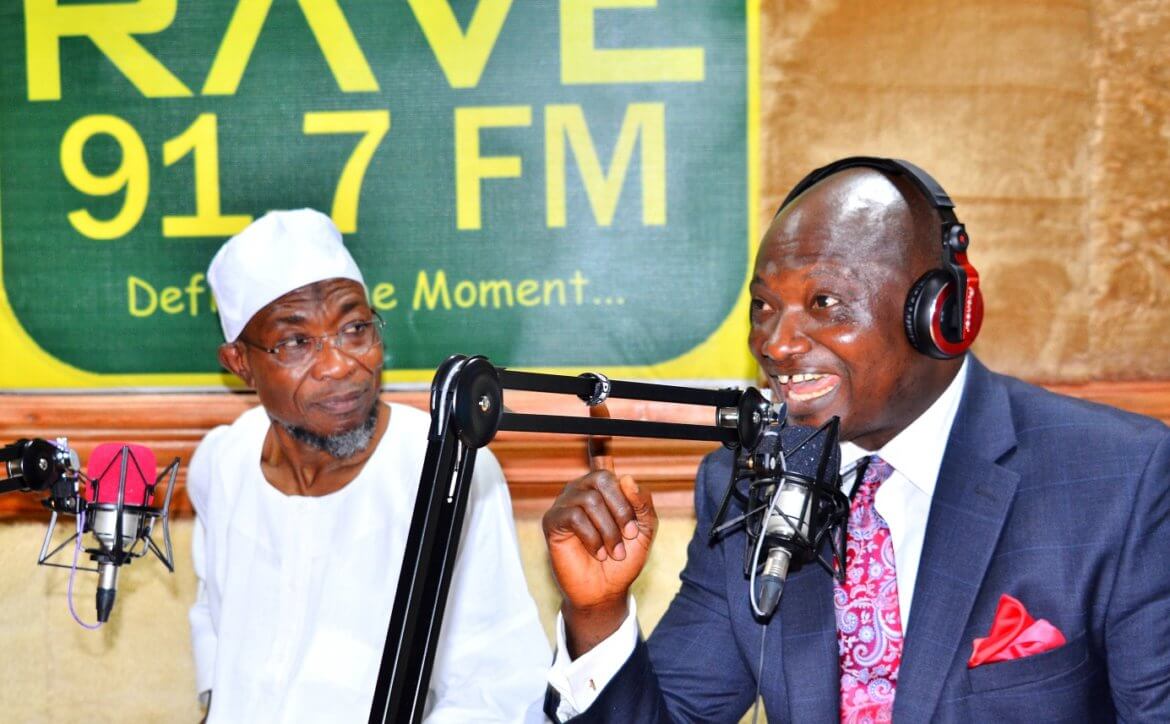 Talk of one radio station that offers music and quality talk programme like never before in Osun State, and Rave FM station will readily come to mind. You won’t believe it that Rave FM is just 2 years old. It is an  FM station, operating in Osogbo, Osun State capital. And Femi Adetila a seasoned broadcaster with a velvetone voice is the MD of the station.

In just 24 months the radio station has become the household name in the entire Osun environs because of its good quality contents and ability to meet people’s demand, most especially the Youth. Rave FM is the first radio station that has mostly targeted youth with the contents it dishes out on a daily basis.

Why did the owner float Rave FM in Osun and not any other state? What has kept the station to this point? These are the many questions, City People Publisher, SEYE KEHINDE asked  Femi Adetila.

How has it been managing Rave FM these past two years?

Well,  I want to start by saying to God be the glory . Media management is like any other business management but it comes with some peculiarities. What sells a media organizations programming  is the quality of its content. With the proliferation of radio stations, there is a stiff competition within the broadcast space and it has become a survival of the fittest. Our listeners have become sophisticated and more aware.

They can separate the grains from the chaffs. They know a pedestrian media channel that engages in mere superfluous public relations gimmick and compromises objectivity. We give them amazing music with quality talk.

And with good listenership, your stream of income is guaranteed because advertising agencies will only patronize stations with good content and a considerable traffic of listeners. So once that is guaranteed and you put the welfare of your staff on the front burner, the job is half done.With good staff, good content and efficient managerial ability, you are good to go.

Rave FM is surviving against all odds because number one, God is on our side and we are putting emphasis on these fundamentals. We have studied our listeners well and we are giving them the broadcast menu they love.

The challenges are many though. It is like every business and every human endeavor. Nothing good comes easy and every good thing starts small. I have always believed that the journey of life is not a super high way. It comes with ups and downs, turns and twists.

Our major challenge has been commercial patronage. Rave FM is at Osogbo with the prevailing attendant, socio-economic dislocations. We are in the middle of it all. It is unfortunate that most advertising agencies do not look beyond cities like Lagos, Ibadan, Port Harcourt, Abuja and Kano. So those of us outside of these premium cities in the hierarchy of advertising agencies are eating the crumbs on the table.

We have to rely on local patronage, which has been the sustenance and occasional campaigns from advertising agencies who appreciate our content quality. To be sincere, power is a bit stable in Oshogbo where we are and that has been a big advantage.

How would you rate the National Broadcasting Commission as a regulator?

I sincerely think NBC is up and doing and I think the organization is very professional. Though we have some overzealous officials of the NBC that want to breathe down your neck unnecessarily but on the average, if you take Nigerian factors into consideration, I think NBC is a great organization. They have very good and commendable work ethics and they play their mentorship role quite well.

I just want to advise them to take the prevailing financial situation in the country in to consideration while dealing with their licensees. Most radio stations are barely managing to survive,some are not even surviving at all. They are groaning under the yoke of salary arrears, power issue, diesel wahala and general environmental issues coupled with the fact that advertising agencies in Nigeria are chronic debtors except very few of them.

Within a space of two years, people say Rave FM is the market leader in Osun, what is the magic?

To God be the glory. I think our major selling point is our content quality. I came into the business with a definite vision to rebrand the broadcast landscape in this environment. I see Rave FM as a brand and we have been doing everything to push the brand in the right directions. We have a brand that has no political affiliation in a very political environment like Osun.

We try as much as possible to present the two sides of the coin and give everybody regardless of their political affiliation, an opportunity to ventilate their views. Though our content takes care of all demographics but we are largely youth centric. We take care of the largely hitherto unserviced youth populations in Osun State. I tell people that there are about 10 (public and private) Universities in Osun State aside many other polytechnics and colleges of education.

Another advantage is that I am lucky to be working with a crop of young professionals who know their onions and are passionate about the business of broadcasting. They have keyed effectively into my vision and they are doing very well in all their beats.

So when you wake up in the morning at 5am with Rave FM, till we close midnight, I parade an array of stars that can hold their own in the comity of broadcasters anywhere in the world. It will interest you to know that I am the oldest in the Rave FM family. We are very youthful, gregarious, professional, creative, enterprising, at times daring and ready to go. To His glory in the last two years, we have had many awards in the kitty, including the Best Radio Station by NUJ and we plan to be the dominant voice in this environment for a long time to come, God helping us.

You said Osun is very political, what do you mean and how are you weathering the political storms?

What I mean is this. Politics is the only thriving business in Osun State. There are no major businesses as it were. When I came to Osun as a Youth Corp member in 1992, there was Steel Rolling Mills, there was Machine Tools, IB Plc, and a couple of others. But today IB Plc is the only surviving firm of them all. So with a massive youth population, everybody is looking towards politics for survival.

The state is often times divided sharply along party lines. Another thing is that, I had a stint with politics for about 10 years, working as a media professional. So some people still use that as standard to measure my professionalism.

Thankfully though, Governor Aregbesola has been fair in his dealings with us, to be sincere. He came to commission this place despite opposition to his coming by some of his political handlers. He has also given us an enabling environment devoid of interference and intimidation to operate. Some of these politicians try to paint us in their own brush, but we have consistently maintained that we are hereto do the business of broadcasting and not to do anybody’s political bidding. We thank God that majority of the people believe in us. We have earned their believe and trust.

Would you say the Nigerian media has lived up to expectation?

The Nigerian media has lived up to expectation. We have played our role as the 4th estate of the realm very well. Our watchdog responsibility within the polity is being carried out with so much candor and dignity. I say it that the media and government must not always agree on issues.

Though it is the wish of government and politicians to cow the media and to reduce them to mere propagandist machinery that parrot their views and regurgitate their ideas no matter how rotten, the media must not always forget its role in the society. Our duty is to critically sieve government policies and measure it against what constitutes public interest because most often politicians feather their nest more than they care for the people. It is the role of the media to checkmate political office holders’ excesses, see through their lies and selfish agenda, puncture their inflated ego and report their corrupt acts.

I must confess that media practitioners are not angels and they are not expected to be anyway because angels do not live on earth, they live in heavenly places. But despite bad eggs here and there, the media still remains the conscience of the nation and Nigerian history buttresses this.

Where do you see rave in the next few years?

By His grace, I see Rave FM, flying high and reaching for the stars. We intend to maintain those principles that we hold dear. The principles of professionalism, objectivity, hard work, creativity, versatility, ethics and above all remain the voice of the people with amazing music and quality talk.

In this environ, we would continue to define the moment. As we speak, there are about 30 radio stations in Lagos, more than 26 in Ibadan and I understand that the migration will be towards this axis. We are ready for the competition, you know wine tastes better with age, that is exactly what we intend to do. Till date, we have consulted for about 4, 5 radio stations. The recommendations came from what Rave FM is doing and we also expect to get better in our consultancy.

How are you celebrating Rave fm’s second anniversary?

We are celebrating with our annual anniversary lecture on the Friday 24th of November, 2017. The lecture with the topic, NIGERIA’S FIGHT AGAINST CORRUPTION: THE FACTS, THE FALLACIES, THE ANTIDOTES will be delivered by Chairman, Senate Committee on Local and Foreign Debts, Senator Shehu Sani, while legal luminary and former President of the Nigeria Bar Association, Chief Wole Olanipekun will be the Chairman of the event.

There would also be a community service to give back to the society while an indoor sports programme opened to our fans would hold at Rave FM. The second anniversary would be concluded with a Thanksgiving service on Sunday, 26th November, 2017 which is the official day of commissioning.

Head Of Service, Chief Of Staff In Heated Argument In Aso Rock [WATCH]