Why I Have Remained Single With No Kids @ 64 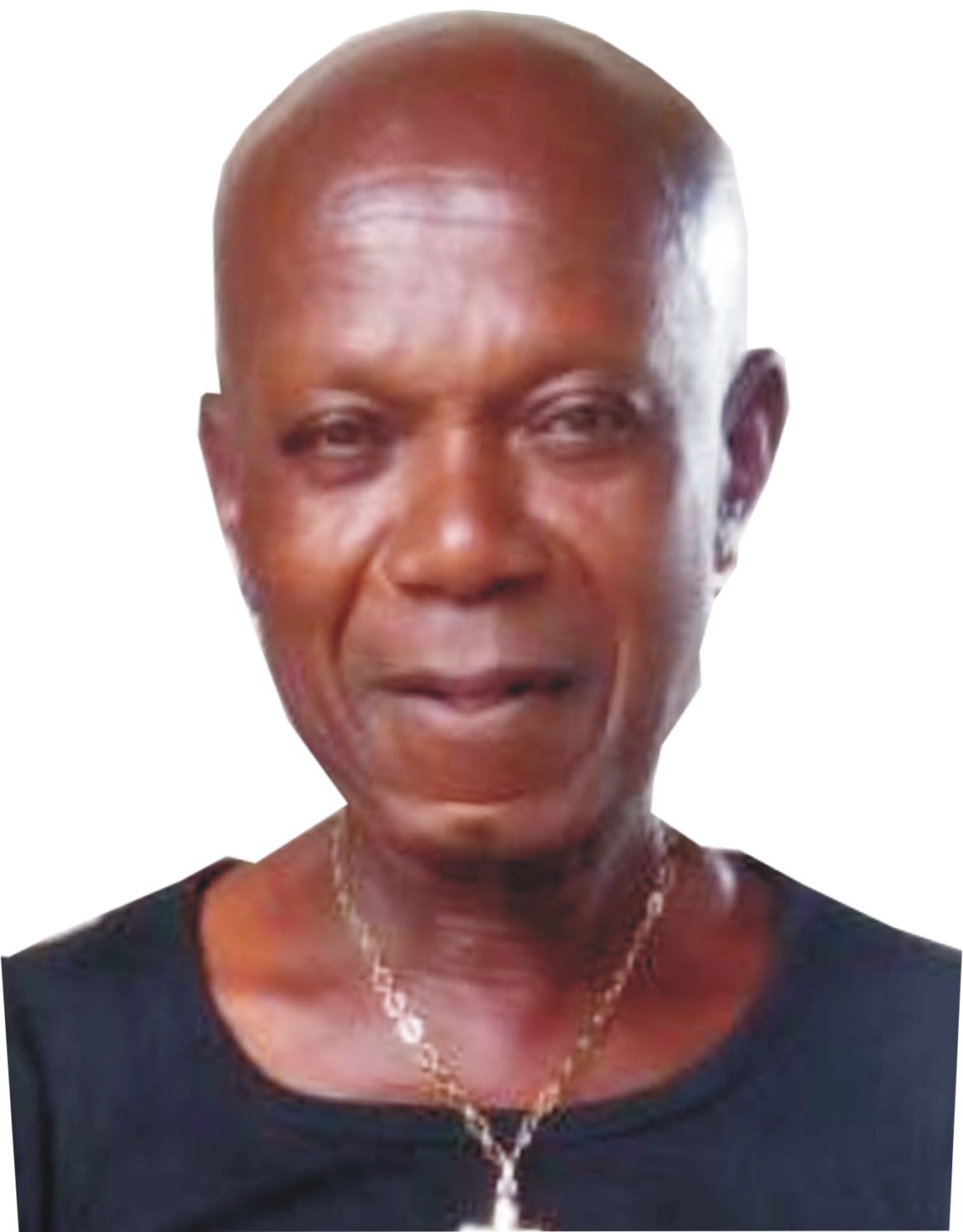 The airwaves of the City of Port usually come more alive whenever Eric Opuada Jumbo Uzoma is on duty at Radio Rivers 99.1FM Station. The Rock ‘N’ Roll Music Aficionado is weird and unique with his feminine dress as he wears hairstyles and ear-rings that surprise you as if he is not straight, but he told City People’s Business Development Manager, BUNMI DUROJAIYE, that he is not gay as he once tried marriage, but it failed. So, at 64 years, he has no wife and no child. Excepts from the interview.

I am Eric Opuada Jumbo Uzoma. I had a lot of stints with Primary School as I started my primary education at Boyle Memorial school at Bonny and moved to Baptist Day school Aggrey road in Port Harcourt and eventually finished at Township School Moscow Road, Port Harcourt. I started my secondary education at African Grammar School, where Navy Secondary School is now located and then the Civil War came and I returned to Enitona High School, Port Harcourt in 1970 and I went to Holy Ghost College Owerri and I finished at Trinity High School, Oguta all now in Imo State. I don’t have university education. I joined Broadcasting in 1975 as I started with Radio Nigeria, Port Harcourt. I had a lot of specialized training both in Nigeria and outside the country as I had a stint in Netherlands, Radio Luxembourg; I had a stint in South Africa too.

Was that where you got the idea about your feminine dress style or was it when you were in Nigeria that you took on the style?

It all started when I was a kid in Port Harcourt to be precise. My grandmother owned one of the best hotels in Pre-war era in Port Harcourt called Metropol Hotel and it was predominantly patronised by whites especially sailors as I used to be very crazy then over things like Jeans and T-Shirts, they were fast-selling wears. Back then, If my grandmother had permitted,

I would have been in The United States of America at the age of 12 years as I met a whiteman who so much liked me and had wanted to take me overseas but my grandmother refused saying that her grand child would be lost in the USA. That was why I developed love for Jeans and I have been in Love with Jeans ever since.

How did you come about the accessories that you wear?
I love accessories such as jewelley, ear-rings and stuffs like that. I just love them as I pick them up to accentuate my appreance when I am going out. So, I just love jewellery and fashion accessories.

Are you married?
No, I am not married. I am single. No kids.

Why?
I don’t know and I can’t explain that.

Are you gay?
No, I am not gay I am straight.

Do you have girlfriends?
I think I have friends. I have a girlfriend.

I put it to you that you are really weird?
Yeah !

What do you do to maintain your lifestyle?
I don’t know as it is quite inexplicable too. What I know is that I try to eat healthy and do a lot of exercises.

Do you have siblings?
On my mother’s side we are 4-children, we are two boys and two girls and on my father’s side he had 7, but some had passed on.

Can you tell me how they see you, I mean your siblings?
Yeah, my siblings see me as someone who is very caring, lovable, understanding. I am just their brother, that is all.

Do you feel different and do you fit into the society?
Well, why not, I do feel normal and I do everything that others do. Just that I mind my business as I am very much aware that in African society, Nigerian society to be precise people are sometimes taken aback by the way I appear in public and by my mode of dressing, but it doesn’t bother me. I got my life to live as I am not into crime. I am not a gay. I don’t try to do things that are unlawful. I am a law abiding citizen of Federal Republic of Nigeria.

Do you drink alcohol and smoke?
I do. I smoke, and I drink beer. As we speak I think I have taken two bottles of beer today.

How did you get into Rivers State Radio Corporation —Radio Rivers 99.1 Fm station and were you dressed like this on the day you were interviewed for the job?

Why not? Ehmm, I did not dress like this to get the job at the Radio Rivers, that is secondary. But I started my broadcast media profession at Radio Nigeria when it was Nigerian Radio Broadcasting of Corporation and that was back in 1975. I just heard the advert on radio that “If you have a good voice and a Credit in English language in either GCE ‘O’ level or school certificate, come over “and I went for the interview and it was fantastic.

It was not, however, smooth second time round. I am saying this for record purposes as I’ve said it time and again that when I was interviewed the interview panel never passed my recorded tape to the boss, for reason best known to them. Back then, the people were very strict. If they invited you for audition, they would go straight to it as you did not have to bribe anybody. But I was shocked when I came for the result and the boss said that I was under the influence of drugs .

How old were you then?

I was a teenager. And so, I left, but fortunately, I bumped into the boss at the super market Kingsway stores, back then. And I said ‘I didn’t see you’ but ‘you were the person who auditioned my tape and said the tape reflected audition of a person under influence of alcohol’. And he retorted: “No, God forbid, come back to our station, I will be ready to interview you”.

And on December 1st, 1975 I returned to the Broadcasting Station at 22 William Jumbo Street, Port Harcourt and when I met him he said “Okay, let one producer go and interview this guy”. And the officer was not comfortable, saying “all these little boys, what do they want to do?

They think that broadcasting is an easy thing”?. ‘Why not come as a session man’ and I said no. And I then told the boss that anything outside facing the microphone would not be acceptable to me. And the man said: ‘Okay’, And it became a little bit controversial as he directed the producer to audition me.

“The following day I went there and I was shocked at the reception I got. It was encouraging and the boss said come in and join us. And I said ‘no’ that I was working then with the Ministry of Health and he said ‘No. Go and resign and if they refuse pack your things and come, I will talk it over with the Commissioner’. I went back and resigned and returned to work on the 9th of December, 1975. And as I reported for duty, I was put on air.

How many years have you been working in Radio Rivers?
Yeah! if you talk about Radio Rivers, I have served for 35 years. This is because I joined Radio Rivers in 1977 courtesy of the pioneer General Manager, Chief O.B Fubara of the blessed memory. Statutorily, I served Radio Rivers for 35 years from 1977 to 2012 and right now I am on contract. And I am here enjoying myself.

When is your birthday?
My birthday is 24th of April. And I will be 64 years old on that day.

Do you have childhood friends?
Yes, I do. I have friends.

How do they see you?
They are my friends and they are proud of me. I have achieved quite a lot. They are happy that they have a famous friend, class mate like me. They relate with me on the basis of who I am. They love Ricky.

What do you have to tell the youth as they are into drugs nowadays like Tramadol, they are gays, homosexuals, lesbians. What is your advice to these people?

Yeah! Drugs do no good. I will advise them not to use drugs, it is not good for them. They should take their destiny in their hands, go to school, get good education and be great men and women. I don’t want people looking at young girls as prostitutes and also I don’t like people looking at young guys as drop outs and drug addicts and stuff like that. I want them to be proactive and get themselves into productive ventures.

Don’t you like to have kids?
No, I do love kids. I have been doing a lot of things; Oh no, come on, not being married has nothing to do with not liking kids. The records are there to show if you go to Port Harcourt children’s Home and if you look into their books, you would see that I have been there for a couple of times to donate to them. I also did the same for the handicaped at The Compassionate Home, Nkpogu, Port Harcourt as an individual and my club went there to give them things. I really tried marriage as I had relationships and it didn’t work out (laughs)

When you go to church, do you pray?
I do believe in God, the Omnipotent, omni-present and the Almighty Creator of the universe, the Alpha and Omega, the beginning and the end, but I don’t believe in churches. When I say I don’t believe in churches it doesn’t mean that I don’t attend church services. It is crazy what is going on these days in most churches. I hate what is going on in churches these days, so I rather pray privately. God means everything to me. I am being very frank with you and very honest. It has been a long time since I attended a church service. But I do pray.

Why I Have Remained Single With No Kids @ 64 was last modified: April 24th, 2018 by Bunmi Durojaiye