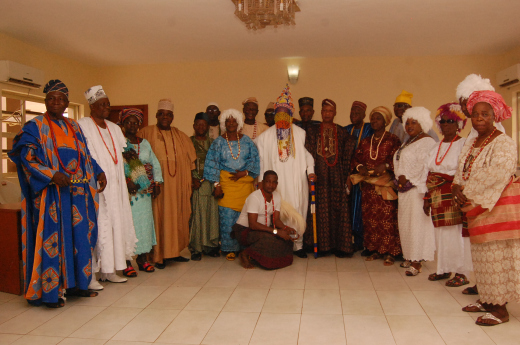 Remoland in Ogun State was on lock down Monday November 20, 2017 as Oba Adewale Babatunde Ajayi became the 19th Akarigbo and Paramount ruler of Remoland.

The new king, Oba Babatunde who completed his 33 days traditional rites at the Ipebi Akarigbo was given a royal reception on Sunday, November 19, 2017 when the king tour round the Sagamu axis of Remoland.

However, the new Akarigbo was given the traditional crown as the king around 10:20 am today, by the Remo Traditional council.

While addressing the people present at the crowing, the Lisa of Remoland, Chief Adeyemi Salami said the traditional council sees it as a necessity to crown the new Akarigo after he has successfully completed his traditional rites at the Ipebi.

Salami added that the affairs of Remoland have now been saddled on the new king, saying he has traditionally become the king of the land.

He, however, said the government would on December 7 officially give the staff of office to the new Akarigbo, reiterating that he has become the king.

He said, “from today henceforth, Oba Babatunde Adewale Ajayi has traditionally becomes the new Akarigbo of Remoland and he is now in charge of the affairs of Remo.

“The government would be giving him staff of office come December 7, but from now he has become the new Aka rig no and Paramount Ruler of Remo”.

According to Tropic Reporters, many people living in Sagamu both indigenes and non-indigenes were rejoicing over the successful completion of traditional rites of the new Akarigbo.

We also observed that most of the people living in Sagamu refused to go to their places of worship, as they all moved around with the new king chanting and praising his name.

It was also observed that almost all junctions in Sagamu were seen holding a welcome party for the king whereby Disco Joystick popularly known as DJ, Fuji Musicians and Dancers were seen entertaining the people.

this is wrong, you will took exclusive story from a platform and you will fail to accredit it to the owner. This is plagiarism of the highest order