Reno Omokri reminds El-Rufai how he knelt to beg Atiku 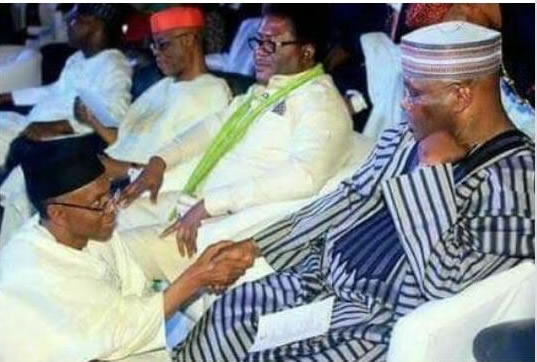 Former presidential spokesperson, Reno Omokri has posted an old photo, reminding Governor Nasir Elrufai of Kaduna State how he knelt, begging Atiku Abubakar when he was the Vice President.

Late last week, immediately after the former Vice President announced his retirement from the ruling All Progressives Congress, APC, the Governor had described Atiku as a serial defector.

He said this when he addressed reporters after he joined President Buhari in observing the Juma’at prayer last Friday, saying that the party was already aware that Atiku would leave in December.

El-Rufai added that, “It was good that he [Atiku] left APC early. If given the ticket of the People’s Democratic Party, Atiku is not a threat to President Buhari in the 2019 presidential election.”

But in response to El-Rufai, Omokri posted a photo where the former FCT Minister was kneeling before Atiku, and wrote, “just negodi the El-rufai that was insulting Atiku Abukakar.”