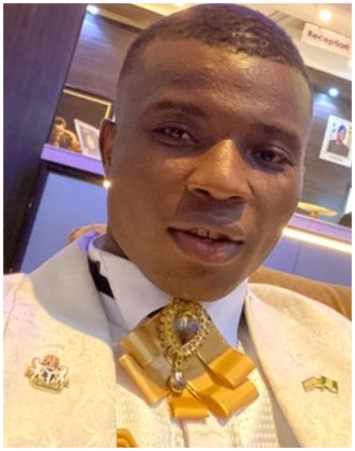 If you’ve been following the trend, you must have noticed that young men have since taken over the business world in Ibadan, the capital city of Oyo State. In fact, they are virtually everywhere and across different sectors-Manufacturing, Entertainment, Engineering, Auto, Construction, Hospitality, Oil & Gas, Real Estate, Fashion, Media, Printing, PR and Branding, ICT just name it. These are vibrant, highly intelligent young men with fresh novations. They are young men in their 20s and early 40s, who are doing exploits in their various chosen fields. While many youths are now venturing into all kinds of illegal activities (internet fraud called Yahoo Yahoo etc), these ones have chosen the path of honour not only to better their lots but to positively affect their immediate environments and the society at large. They have not but distinguished themselves from others. In this report, City People’s Correspondent, DARE ADENIRAN presents to you list of the most talked about young men rocking Ibadan’s business world. What they do and why people won’t just stop talking about them. Enjoy it.

Bukola Odeleye, no doubt, has proven his mettle in the construction industry. He is the Chairman/CEO of BEEDEL Construction in Ibadan. What many people don’t know is that BEEDEL is not a new comer in the sector, he has been around for a while. Since Bukola Odeleye quit his plum job at Procter & Gamble (P&G) some years back to float BEEDEL Constructions, he has handled and still handling high profile projects for many local and international organizations as well as private individuals. BEEDEL Constructions, a subsidiary of BEEDEL Strategic Investment has become a brand to recon with in that sector.

He doesn’t like to be addressed as Chairman or CEO, he is simply called ‘Chief Trader’ by his members of staff. He is the brain behind the popular Titan Farms in Ibadan. Titan Farms is a Real Estate and Food Processing company. Under which Titan Rice, Titan Rice Flour, Titan Table and Titan Yam Flour are being produced locally His Titan Rice is becoming a household name within and outside the ancient city of Ibadan as well as the South West. Gbenga Eyiolawi, the Aare Kebimapalu of Ibadanland, is a serial entrepreneur, marketing professional and political strategist.

He is an architect of great repute. He is the MD/CEO of Amron Global Group of Companies and Hassan Olawale Giwa (HOG) Foundation. He plays big in the real estate sector both in Ibadan and Abuja. Architect Hassa Giwa is also a politician.

Konyin Owoeye is as rich and as brilliant as they come. He is the son of the founder and Chancellor of Lead City University, Ibadan, Prof Jide Owoeye. Konyin is a silver spoon of the finest breed but carries no airs, no chip on his shoulder. He is the CEO Lead Radio 106.3 FM, Ibadan and a member of the governing council of Lead City University. Konyin plays big in the entertainment and sports sectors. He is a former President of the Ibadan Polo Club.

He is another silver spoon who doesn’t make noise about himself. The young and hardworking Biola is the son of late construction giant, Chief Oyedele Ibrahim popularly known as ‘Inaolaji’. He is a big-time farmer and does a little bit of construction as well.

He is the Director and Founder of the popular Valencia College in Ibadan. Goodness, an Engineer and a graduate of the Federal University of Agriculture, Abeokuta (FUNAAB), has built his school into an enviable level. Today, Valencia College is ranked amongst the Ivy League private schools in Ibadan.

Sola Awujoola (@mylivelihood) is a luxury jeweller and the brain behind the popular No. 1 Hotel and Lounge in Ibadan. He is well connected both home and abroad. Many top Hollywood stars are his clients. He customises accessories and gadgets for most of them. He is married to Deola, the beautiful daughter of Senator Smart Adeyemi.

He is the brain behind Sonos Nig Limited, a leading printing and branding company in Ibadan. His company provides top-notch services in printing, sewing and branding of all kinds of corporate and individual items. Sonos also provides special services through the production of customized and non-customized Ready-Made T-shirts, Facecaps, etc.

You can never beat him to it when it comes to nightclub business in Ibadan. Saheed Lawal is the young man behind the popular SWITCH Lounge and Night Club. He sure knows his onions, as he keeps bringing in fresh ideas into his business all the time. You may pass through the club today and tomorrow you find that a new face-lifting has commenced. That is Saheed Lawal for you. He is one of the hottest guys in that sector.

Seun Oluwajana, popularly called Seun Jana, is one of the pioneers in the new generation of Media, Advertising and Entertainment Industry especially in the Southwestern part of Nigeria.

After his stints at various media organisations, he launched his media and advertising agency, Canwest Media Nigeria Limited in 2018. The agency has since grown to be one of the biggest in that sector with several multinationals and indigenous companies joining its long list of clientele.

His Advertising Agency has also been bridging the gap between Lagos clients/agencies and the fast-growing Southwest market which could also be confirmed with the recently released maiden edition of Southwest Media Survey 2020 conducted by Canwest Media.

His dominance in the Media, Advertising and Entertainment sector earned him recognition from His Royal Majesty, Ooni of Ife, Oba Adeyeye Ogunwusi as one of the top 100 young leaders in Nigeria at the maiden edition of Royal African Young Leadership Forum 2020 and also a recipient of different media-related awards.

He is a co-owner and partner in other companies with an interest in Human Resources, Marketing, Humanitarian and Philanthropy, Tourism and Consultancy Services.

The name Akinade Akintayo may not ring a bell in Ibadan but at mentioning Beard Gang, people already know who you are talking about. Akin Pivotal, as he fondly called, is the initiator of Beard Gang Movement. He is also the CEO of Pivotal Entertainment with an interest In Brand Communication, Events and Entertainment. He has on his list of clientele many indigenous and multinational companies.

He has done lots of partnerships with a good number of notable brands. His company is always part of any major events, especially in the city of Ibadan, in partnership or support capacity.

Pivotal Events also specialises in sourcing for faces that suits the brand’s reputation and fix for the best of visual and still pictures that will promote their products and services.

Emeka is the WizKid to watch out for in the IT world. He’s in his 20s with a strong vision and passion to be the best in his field. Internet Lord, as Emeka is popularly known, recently opened an ICT centre called Tech-Hub By SmithFelix2geda.net. It is an ICT centre where youths will be trained the nitty-gritty of IT. It offers services like ICT Academy, Web Designing, Graphics Design, Social Media Account Management, Internet Advert, Bulk SMS, Blogging, Computerized Conference Room and more. The Olubadan of Ibadanland, HIM Oba Saliu Adetunji and Aare Gbenga Eyiolawi, Titan Farms’ anchorman as well as other dignitaries graced the official opening of the ICT centre, located at Felele Area of Ibadan.

Emeka’s journey into the tech world didn’t start today. In 2011, he established Smithfelix2geda.net through which he developed Nigeria’s ‘first’ social media website 2geda.net in 2015. Though his first attempt to launch a social media website didn’t work but Emeka has since gone back to the drawing board and fortified himself in computer programming the more and he is now fully back. His major focus is to build a social media that will be 100% Nigerian-owned.

Topside as he is popularly called is in charge of the Rock Night Club, located also in the Palms Mall. He has been around for a while too. He is also into the auto business. He started with Topside Lounge and Night Club around the Oluyole area of Ibadan before moving to the present location.

Otunba Cruzer as he’s fondly called is one of the hottest young entrepreneurs in Ibadan. He is the CEO of Cruzer Lounge and Bistro and Basco Nigeria Limited. He is known for his high taste for quality things and that has always been reflecting in whatever he does. When he opens his club some months ago, he promised to change the face of nightlife in Ibadan. True to his words, Cruzer Lounge and Bistro has become a meeting point for big boys and many fun-seekers in the ancient city. A good number of top Nigerian music icons have, at one point or the other, performed at Cruzer Lounge. Otunba Moses Adebayo is not into nightclub business alone, he’s also into automobiles. His company, Basco Nigeria Limited is a major distributor of Bazuki bikes, JAC trucks, JAC trailers, JAC tippers, Jincheng motorcycles and others.

The ever-stylish Biodun Durodola is a fashion designer, stylist and wardrobe consultant. He is the brain behind IyiCollection in Ibadan. He is currently working on a new business venture, a lounge and nightclub called Ibiza. Biodun and his partners are putting finishing touches to the club and it promises to be exclusive when completed.

Yemi is another fine, young businessman in Ibadan. He is also a politician. He runs the popular GQ (Gentlemen’s Quarters) with branches in Ilorin and other places. He is now the Honourable Commissioner for Youths in the State of Osun.

He runs the popular Mauve Lounge/Night Club, which is another phase of the Mauve 21 Events Centre and Hotels at MKO Way area of Ibadan. He is the son of the retired army general, Major General Muraina. He is making his parents and the youths proud in the business world.

He runs one of the top-notch nightclubs in Ibadan. Ebevande, no doubt, is a classy nightclub. He has brought lots of innovations into the business. Ebevande is located on Ring Road, Ibadan.

Kay, as he is popularly called, is an auto dealer. He is young, rich and very popular in Ibadan.

He is the MD/CEO of Jobolar Ventures. He is a big-time drinks distributor in Ibadan. I.D, as he’s fondly called among his family and friends, is also into fish farming.

READ ALSO: GOV. WIKE REVEALS HOW HIS SUCCESSOR WILL EMERGE

Why Pastor ADEBOYE Had A Change Of Mind About Late Prophet T. B. JOSHUA