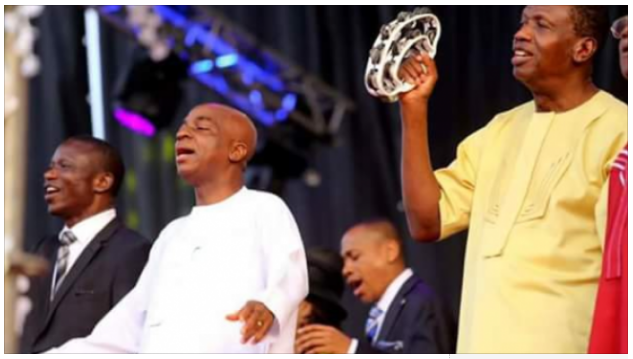 General Overseer of the Living Faith Church Worldwide, David Oyedepo, says his Redeemed Christian Church of God counterpart, Enoch Adeboye, at the had a revelation about a potential plane crash involving him.

Oyedepo and his wife, Faith Abiola, were recently involved in a near air mishap which was said to have been caused by a mechanical malfunctioning.

The Presiding Bishop of Winners Chapel worldwide who spoke on Friday at Canaanland, Ogun state, said Adeboye showed up in his house on the morning before the journey to pray for him.

“According to the word of God, before the great and dreadful day of the Lord will hit the earth, there will be a restoration of sonship and fatherhood to the body of Christ,” he said.

“On Friday preceding the journey that we made, my father in the Lord showed up at 6:30 early in the morning and saw a vision and wasn’t sleeping, and said, ‘Lord, Lord, why seek the living among the dead? No, no…’ So, he took off and landed here before 6:30 am. No, there was no idea that he was coming, and there was no discussion after it. The heart of the father will be drawn to the heart of the son to defend.

“Understand what I’m saying. You don’t have inheritance in a pastor; you don’t have in a teacher. Many of us have teachers all our lives. Did they share anything with you when they died? Did any teacher write your name in his will? You only have an inheritance with a father.

“A good man leaves an inheritance for his children to inherit. Fatherhood is not an accolade, it is a revelation. So, that was not technical failure, it was a spiritual attack that Jesus averted.

He explained that the figures quoted by the government was not correct and urged the governor to invite the workers to the negotiation table.