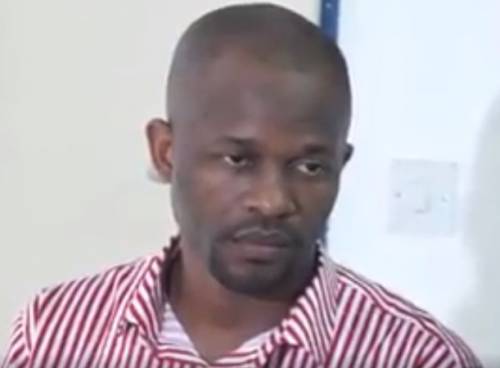 Ikpamezie was one of four persons arrested and paraded by the police in Abuja for electoral fraud in 2018.

Uzodinma made the appointment after a controversial judgment by the Supreme Court brought him into office as governor of Imo State on January 14, 2020.

Findings by SaharaReporters revealed that Ikpamezie is a hardened political criminal, who has been working for Uzodinma and the All Progressives Congress for a long time to disrupt elections in their favour.

He had been working for Uzodinma since he was a senator.

Innocent Ikpamezie was paraded in 2015 by the Police for criminal conspiracy, forgery, stealing and unlawful possession of electoral materials meant for the aborted APC ward congress in Imo
Recall that in 2018, the APC held a nationwide ward congress that was marred by violence and bloodshed.

Imo State could not hold the exercise as thugs invaded the party Secretariat, disrupting the congress and carting away election materials.

Imo State governor at the time, Rochas Okorocha, accused Uzodinma and some party leaders of sponsoring the thugs to disrupt the exercise.

Weeks later, the police arrested Ikpamezie alongside three others for masterminding the disruption of the ward congress in Imo.

Former spokesperson for the Nigeria Police Force, Jimoh Moshood, while parading the four — Ikpamezie, Lawrence Archibong, Kelechi Affonne, and Joseph Martins — before the media, said they stole and hijacked some electoral materials due for ward elections in Imo State.

He revealed that Ikpamezie was then the Special Adviser on Electoral Matters to Uzodinma.

The ex-PPRO said electoral materials were recovered from Ikpamezie, which he claimed were given to him by Iyke Njoku, Zonal Coordinator of Owerri Municipality, on behalf of Uzodinma.

Moshood went on to say that the four suspects would be charged to court for criminal conspiracy, stealing and unlawful possession of APC ward electoral materials.

However, after the public display of the suspects, nothing was heard of the matter again.

Ikpamezie and the three others were secretly released while he continued carrying out dirty jobs for Uzodinma and APC in Imo.

His latest appointment as GM of OCDA by Governor Uzodinma is in reward of his ‘illustrious’ service to the Imo helmsman.