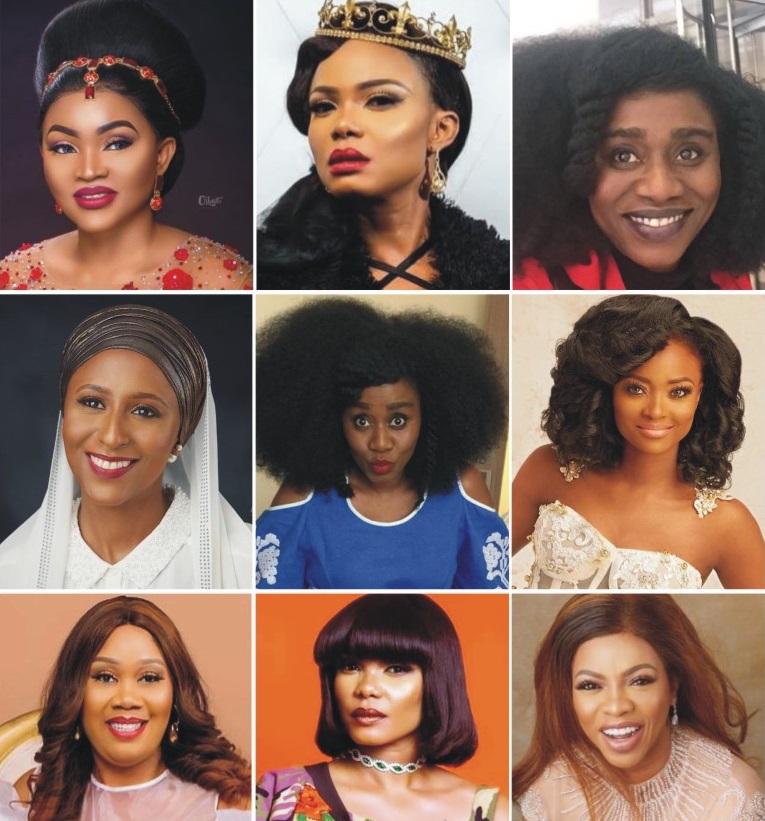 The last few months have had a colourful celebration of pretty celebrity women, who turned 40. Saying 40 is the new 20 aptly describes this bevy of beauties. They did not just turn 40, but looking  fit, fabulous and younger than their age.

Curiously, however, at  40, some women are like sapphire, they glow as a brilliant blue gem thus, colouring  and dazzling the world with their beauty . Some are sassy as teens and cute as amber studs. This set of women is not just 40’ but  high class CEOs, entrepreneurs and top managers at high-profiled companies. They have beauty to go with class. Some opted for a low-key celebration, while others some had it very loud.

One synonymous thing about most of them is that they had a session of beautiful photo shoot done by top celebrity photographers such as TY Bello, Eleanor goodey, transformaz, Klala. They were styled by notable stylists in the fashion industry. On this list is Aisha Bello-Tukur, who is a Social Entrepreneur and a Life Coach. She is tenacious, selfless and passionately dedicated to making the world a better place. She is the pretty wife of Mahmud Tukur, the Chief Executive Officer of Eterna Oil and Gas Limited and one of the sons of the PDP’s former Chairman, Bamanga Tukur. The dark and slim lady studied Business Administration at Ahmadu Bello University (ABU), Zaria.

She is also, an alumnus of the Pan Atlantic University, Lagos. She is member of the International Women’s Organization for Charity (Small World), member of the Social Sector Dialogue Committee; Coordinator, Ruxton Women Association and Vice Chairperson, Ladies of Republic of Nigeria (LORON) .She is the Chief Believing Officer of Orbus Global Solutions.

The beautiful woman, who calls herself a ‘social preneur’,  had a quiet 40th with only close members of her  family. She opted for a white dress and a bronze turban for her exclusive photoshoot by Eleanor goodey.

Tope Awoye who is popularly called Temmy Thorpe, also turned 40 forty. Many society babes know  her as a snail knows its shell. She is a smashing beauty and a collector of expensive lace and jewellery. She was living in the US before she relocated to Nigeria a few years back. She runs a thriving boutique where she stores lady’s wears, shoes and accessories. Her shop is one of the most sought-after fashion stores, so to say for many big babes. Beautiful in and out, she rocks Lagos party scene. This amiable lady had her shoot done by Transformaz Photography. Her lovely outfit was made by one of the wave-making designers in Nigeria,   Jbliving, and her lovely make up by Bibyonce.

What about First Bank big babe, Funmi Ajagbe? She is the petite, dark and beautiful lady, who went to Obafemi Awolowo University, where she read International Relations and Affairs. She was a customer service executive at MTN, a branch manager at Guaranty Trust Bank, where she worked for 8 years and  now at First Bank Nigeria, where she has been holding the business manager’s portfolio in the last 5 years. Beautiful Funmi, who never looked 40 had her birthday shoot with TY Bello, dazzling in four outfits. She wore a white, flowery-corset tulle dress, a red jacket and skirt,  a black-velvet dress paired with a red fascinators, and she also dressed up in a purple-and-gold dress.

There are some divas in  Nollywood who also turned 40. Alice Iyabo Ojo, film actress, director, and producer has featured in more than 150 films, as well as produced over 14 of her own. The star actress-cum-businesswoman had her birthday party in December and celebrated it big at Lekki.  She had several photoshoots before the ‘D’- day, where she was styled in 4 different outfits. Her party was attended by her colleagues and many other important personalities.  The classy birthday took place at Lekki Coliseum and guests had unlimited fun. Iyabo never looked close to 40 because of her petite physique and beauty.

She went to school in Lagos at National College, Gbagada, before proceeding to study Estate Management at Lagos State Polytechnic. Ojo has scripted many and featured in several Nigerian films.  Her first role was in 1998’s Satanic, an English-language film. In 2002, she made her Yoruba-language debut with Baba Darijinwon. She is also one of the actresses, who have done a cinema film premiere. In January, 2015, her film Silence, which features Joseph Benjamin,  Alex Usifo, Fathia Balogun, and Doris Simeon premiered at the Silverbird Cinemas, Ikeja in Lagos.

She is the CEO of her NGO, Pinkies Foundation, which caters to the children with special needs and the less privileged. Her colleague, Mercy Aigbe, who doubles  as a businesswoman is best known for her Yoruba-language movies. Very pretty and highly stylish, she is one of the best dressed queens, of Nollywood. She had her birthday in a very big way and it was graced by bevy of Nollywood actresses and actors. She wore the best for her photoshoot and also for her birthday proper  Mercy Aigbe is one of the most sought-after actresses, who has a  great sense of style. She attended Maryland Comprehensive Secondary School, Ikeja, Lagos; The Polytechnic Ibadan, Oyo State where she received her OND in Financial Studies and also went to  the University of Lagos for a Degree in Theatre Arts, which she earned in 2001. She joined the industry fully in 2006. Mercy Aigbe launched her clothing store, Mag Divas Boutique, in November, 2014. Its success earned her the  Fashion Entrepreneur of The Year award and  other awards.

The photo girl as she is called by many of her fans, TY Bello, had the best of time a few weeks back when she clocked 40. Her friends threw a classy surprised birthday party for her. No formal photoshoot for the birthday girl, contrary to what everyone was expecting, but during her birthday, she displayed some beautiful photographs she took on a major trip outside the country. Ty Bello is an award-winning photographer and the most sought-after as far as photo shoot is concerned. She has a large clientele and enjoys huge patronage. Her work is a testament to that. The pretty girl, who always loves to look natural also does music, which is her first love and she is best known for her singles: “Greenland”, “Ekundayo”, “This Man”, “Freedom” and “Funmise”. Born in Ogun State, she obtained a degree in Economics from the University of Lagos. She briefly practised journalism and eventually ventured into photography. TY Bello was the official photographer to a former President, Dr. Goodluck Jonathan, during his tenure. She also does work for Thisday fashion magazine. TY Bello organises an annual photography exhibition to raise funds for Orphans in Nigeria. She is also the Director of Link-a-child, an NGO. TY Bello married Kashetu Bello in 2009. The couple gave birth to twin boys named Christian and Christopher on 10 October 2014, which coincidentally marked the release of The Morning Songbook.

What about Utibe Rone? She is a billionaire’s wife and hot stepper with a flawless skin. Utibe Rone popularly called Yutee is a big time fashion designer based in Abuja.  Her label also goes by her name, Yutee Rone Fashion Collections.  Her specialisation is strictly women clothings at least for now.

Having participated in fashion shows across the globe, she is one of the best designers we have around.  Yutee is married to  an Abuja businessman and oil and gas big boy, Julius Rone. She clocked 40 on December 2017  and the beautiful mother of 3 lovely boys celebrated it with members of her family. Another actress is Toyin Alausa, one of the popular faces you see when it comes to soap operas on Nigerian television. The amiable lady has featured in so many television series where she has carved a niche for herself. She also celebrated her birthday in a big way at her residence, where she invited majority of her colleagues, and family members. In her thirties and a single mother, Toyin, now a business woman, has featured in soaps such as  Family Ties, Treasures, Edge of Paradise and Doctors quarters on MNET and a host of others.

The new 40 club members  also include very pretty  Esohe Osawe, a Lagos big babe. Her lovely photoshoot was captured by klala. She glowed in a white top and peach skirt.  She followed it up by a green-long dress, for her photoshoot.

Mrs  Bolaji Giwa’s birthday was planned by Event Perfect Limited. She had an all-peach affair photoshoot. She runs one of the popular fabric stores at Tejuosho and Lekki. She is the boss of Trendy Fabrics. Mrs Alaba turned 40 as well. She is a big-time fabric merchant in Lagos. She rocked a peach-and-gold dress and her photoshoot was done by klala. She wore a beautiful black-and-white monochrome lace. Olusola Ajike Alawode-Apeloko, one of Nigeria’s most celebrated gold jewellers and premium hair merchants, clocked 40 two few weeks back. She is a graduate of Law from the University of Ibadan, Sola runs @thejewellerygallery, a gold jewellery store and @alexanderhair.ng, an upscale premium hair outfit. She is well loved and admired by people for her unalloyed loyalty to friends, vivacious spirit and generous nature. Sola is the daughter of the late Chief Sunday Olaniyan Alawode, a very formidable politician in the Second Republic, who was fondly called “007” by his teeming admirers. Her marriage to Ayodeji Apeloko is blessed with two children.

To mark her milestone age, Sola did a photo shoot, taken by Trans4maz fotography.