Home News Revealed! The Type Of Yam That Makes You Have Twins
News 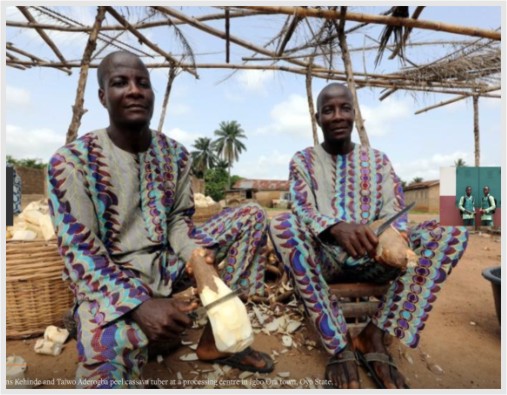 •That Is What They Eat In IGBO ORA In OYO State

•That Is Why More Twins Are Born In IGBO-ORA

Igbo Ora is a small town. It is only 80 kilometers from Lagos, a sleepy town in Oyo State with a simple way of life, made up of mostly farmers and traders. It is considered the Twin capital of the world and has the stone plinth that boasts of it. Because more twins are born in Igbo-Ora than anywhere else in the world, walking through the town might make you feel like you are seeing double. Almost every house has at least one set of twins.

While there are speculations that the births might be due to genetics, research has suggested that multiple births could be related to the eating habits of the women in the region. It was found out that, that there is a particular yam, white yam they eat in Igbo Ora.

Cassava is quite popular in the Yoruba diet as it can be eaten in many forms such as Amala, Garri, Fufu, etc. This is in addition to the many stews peculiar to the Yoruba people. Research carried out at the University of Lagos Teaching Hospital investigating the multiple twin births points to a high level of a chemical found in the peelings of a particular cassava and yam tubers.

Numerous works have shown that the tuber food of the Yoruba women, especially the peelings, contains a very large amount of these chemical substances. These women have a disproportionately large amount of these chemicals in their system and this encourages the release of more than one egg. There is enough reason to believe in this theory.”However, the leader of the Igbo-Ora community has also linked the births to the soup they eat with these tubers saying: “We eat a lot of the okra leaf or Ilasa soup. We also eat a lot of yam and these diets influence multiple births.”Central to the Yoruba people’s diet is the cassava, a plant with a tuber root, which can be eaten in addition to the leaves and flowers.

Research into multiple births carried out at Lagos’s University Teaching Hospital has suggested that a high level of a chemical found in the Yoruba women and the peelings of the tuber could account for the high level of multiple births. A consultant gynecologist at the hospital explains:

‘These substances are usually linked to the release of more than one egg, which usually leads to twin pregnancies. That means that there is possibly an environmental factor that encourages the high level of this chemical substance.’ The doctor, who has witnessed many multiple births at the run-down hospital, continues by linking the staple diet of the women to the prevalence of the chemical:

‘Numerous works have shown that the tuber food of the Yoruba women, especially the peelings, contains a very large amount of these chemical substances. These women have a disproportionately large amount of these chemicals in their system and this encourages the release of more than one egg. There is enough reason to believe in this theory.’ So, could it be that eating tuber peelings leads to multiple births?.. There are so many twins because of the okra leaf that we eat,” said 15-year-old Kehinde Oyedepo, one of the twins, repeating a view commonly held in the town. The leaves are used to make a stew that is popular in Igbo Ora.

Others have pointed to the popularity of Amala – a local dish made from yams and cassava flour. One theory is that yams prompt the production of gonadotropins, a chemical agent that stimulates the production of eggs.

Thus far scientifically, no one can say this is the reason,” said Olarenwaju. “One of the plausible reasons is the hereditary aspect of it because maybe over the years they inter-marry, they now have that gene being pooled and concentrated in that environment,” he said. But the women who sell piles of okra leaves at a town market are quick to disagree.

They said local traditions over how the leaves are consumed were crucial. For example, a stew made from the leaves should be eaten immediately and never stored. Oyenike Bamimore, who sells the bread, said she was living proof that the diet was the cause. “Because I eat okra leaves a lot, I gave birth to eight sets of twins,” she said.

Some hypothesis noted that yams act as anti-estrogens,” Anti-estrogens fool the brain into thinking there is insufficient estrogen, causing it to release more of a hormone called gonadotrophin and increase the ovulation rate. No wonder, twin births have been recorded in large numbers in Igbo Ora.

Revealed! The Type Of Yam That Makes You Have Twins was last modified: October 28th, 2020 by Tayo Oyediji