REVEALED: Voters get N500 each to sign the recall form against Senator Dino Melaye

A bid to recall Senator Dino Melaye representing Kogi West Senatorial District of Kogi State has taken a new turn as emerging evidence is revealing that voters from various constituencies are being lured to sign the bid with the sum of N500.

The irrepressible Senator, who had in the time past proven his radical and ideological stance in the face of oppressive forces has shown no sign of intimidation and has mocked the system as a joke, with evidence of the list of signatures that comes in one handwriting.

More indicting evidence was posted by an indigene of Kogi state, Kayode Kolawole on Facebook some hours ago. He cryptically gave clues of what is currently going on in Isanlu, an area of Yagba East Local Government Kogi.

According to him, some groups of persons are giving out N500 each to come out eith their PVCs and sign a recall form.

issue of being a President when some people are on the street dey hustle neva finish PLEASE NO BE NAIJA PRESIDO NA NUJ PRESIDENT,now I come dey hear say 2 BABE ELEPHANT dey fight from the same KOGI STATE say den wan remove dem self dat I should bring my PVC for just #500 to my pulling unit 4 what? Chai,can #500 transport somebody 4rm ABUJA to ISANLU MY HOME TOWN? una Neva ready if den no feet make it 50k make den liv ham 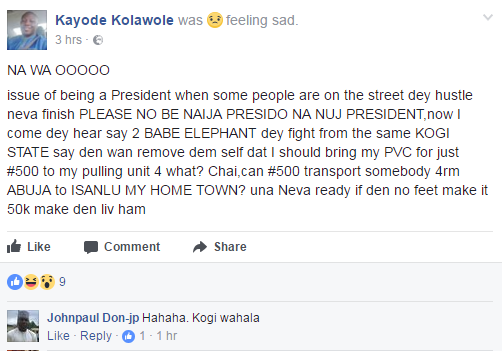 REVEALED: Voters get N500 each to sign the recall form against Senator Dino Melaye was last modified: June 11th, 2017 by Reporter

Aisha Buhari congratulates Tinubu family on the birth of their granddaughter