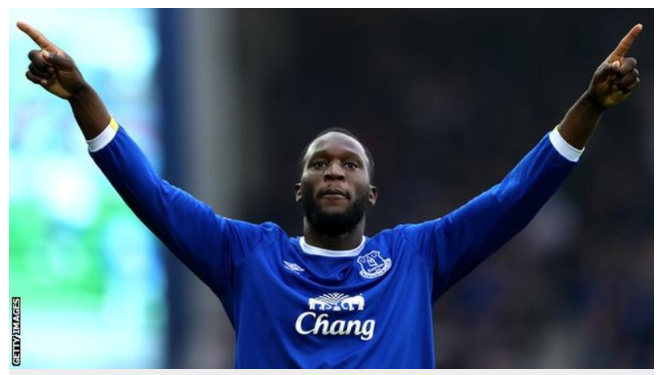 Everton’s top scorer during the just concluded season, Romelu Lukaku has decided where he wants to play next season.
The 24-year-old Belgian international that scored 25 Premier League goals last season, turned down the most lucrative contract offer in Everton’s history in March.
“I don’t want to stay at the same level. I want to improve and I know where I want to do that,” Belgian Lukaku said on Monday.
“We are now talking to the club. I know what’s happening, but I will leave the talks to my agent.”
Chelsea, Manchester United and Bayern Munich have been linked with a move for Lukaku, who has been at Everton since 2013.

SEE ALSO: ‘JOIN CLUB WHERE YOU’LL BE THE ‘MAIN MAN’, WENGER ADVISES MBAPPE
“I know what’s happening, but I can’t tell you anything more,” he added to journalists after Belgium beat the Czech Republic in a friendly in Brussels.
“What I would like most is to play in the Champions League and try to win the Premier League once. Or better – a few times.”
Lukaku is represented by Mino Raiola, the agent who helped negotiate Paul Pogba’s £89m move to Manchester United last summer.

His former club, Chelsea look to be in the position of luring hom back to Stamford bridge in other to bring strength to the forward position as Diego Costa looks to be dreaming a return to Spain.

The Blues will also be competing in the UEFA champions League next season, hence a need for a larer squad.

Romelu Lukaku Set To Quit Everton, Reveals Where To Play Next was last modified: June 6th, 2017 by Damilare Salami