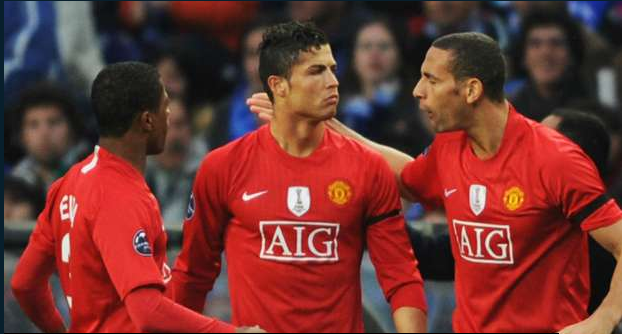 Patrice Evra and Cristiano Ronaldo enjoyed considerable success alongside Rio Ferdinand at Old Trafford as part of a star-studded squad under Sir Alex Ferguson.
Ferdinand, an ex-England International likes to show the world that he is staying in shape after slipping into retirement, but his workout routines have been mocked by former colleagues.
Neither is showing signs of slowing down, but Ferdinand believes both could learn a thing or two from him in the art of longevity.
Evra and Ronaldo are not too sure, though, with both taking the opportunity to question the methods of a former team-mate.
The video above shows Ferdinand crawling across his lawn in what is known as the weighted bear crawl.
He believes there are plenty of benefits to such a routine, but Ronaldo – who has just opened his own chain of gyms – is not convinced, posting: “Wtf again is that???????”
Ferdinand hit back by saying: “I told you before it will mess you up bro! Start now and you might play until you are 50!!!”
The trolling was not over yet, though, with Evra quipping in with: “First man ever walked?? Can you please stop @rioferdy5 or you can come and wash my floor bro I love this game ahhaahahahah.”
Ferdinand took the abuse in his stride and ensured that he would have the last word by offering the following response to his diminutive former colleague: “This is the height I have to be at to talk to you bro!”

Start the week with a smile on ya face… bear crawls attacking the body this morning! #JustShowUp #Positivity

CONFESSION! “I Was Once Married At 19, I Don’t Want To Go Back To It” – Ex #BBNaija House Mate, Gifty Powers