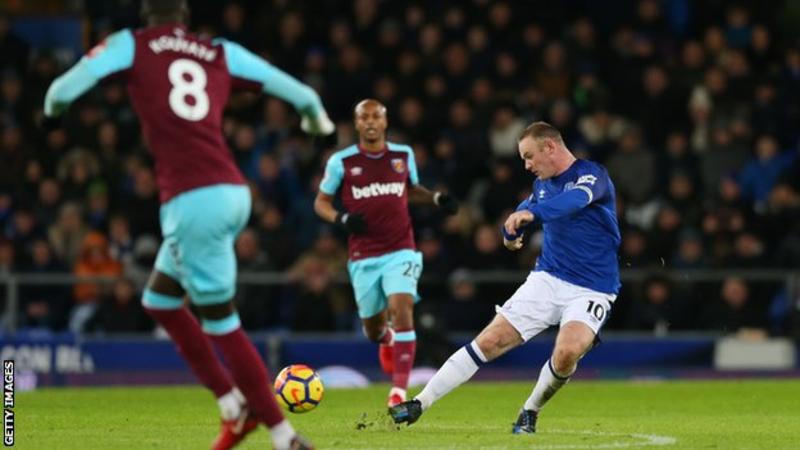 Wayne Rooney scored a stunning goal from his own half to complete a hat-trick as Everton thrashed West Ham in front of incoming manager Sam Allardyce.

“It was one of the best goals I’ve ever scored,” he said. “I hit it as well as I’ve ever hit a football. To make it my first Everton hat-trick was special. It was a perfect moment.”

Hammers manager David Moyes, who saw midfielder Manuel Lanzini’s penalty saved by Jordan Pickford when West Ham trailed 2-0, was left to rue a terrible first half from the Londoners at his former club.

Rooney headed in the rebound after Hart saved his penalty for the game’s opener, and swept in his second 10 minutes later after good build-up from youngsters Jonjoe Kenny and Tom Davies.

Defender Ashley Williams added the fourth late on, powering a header beyond Hart from a corner as West Ham remain in 18th position.

Everton had to withstand sustained pressure after the break when the introduction of Diafra Sakho helped West Ham rally.

But caretaker manager David Unsworth – who will return to coaching the club’s under-23s – signed off his eight-game spell since Ronald Koeman’s sacking in October with a deserved win. The Toffees also recorded their first league clean sheet since the opening game of the season against Stoke.