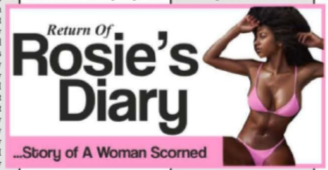 There was a table not too far away from us. Charles led me to the table, raised up my skirt and pulled down my pant. I couldn’t stop him. I just stood beside him, leaning slightly on him so he could relieve me of my pant. When he was done, he unbuttoned my top, dug his hand inside my bra and gave my boobs the freedom they so badly craved for. Judging by the way the two mounds of tasty looking flesh sprang out of my bra, you could tell they were glad to get their freedom.  Charles’ eyes lit up with excitement. He liked what he was seeing on my chest. And slowly, he bent over, took my breasts in his mouth one after the other, before finally laying me on the table. I couldn’t look at what he was about to do. I covered my eyes with my hands and remained motionless on my back as I lay on the table. Charles lifted up legs and rested them on the table before spreading them slightly apart. He then quickly removed both his trouser and boxers and stood in between my legs. By the time Charles unleashed his sugar stick and placed it at the mouth of my honey pot, ready for penetration, I swallowed a lump of saliva in my mouth. This was the moment I had been waiting for. This was the day I would become a woman…..

Charles leaned closer and as he positioned himself in between my legs, he again, took my breasts in his mouth. First, he took my right full boob and rubbed his hand all over it, delicately, gently, as though he was scared he could damage it if he pressed too hard. He shifted his focus to my nipples and then sucked and licked them sweetly and hungrily like his life depended on them.  He stuck a finger inside my honey pot and tickled my clit. I nearly went crazy

“Ahhhhhhh…..” I let out a big moan. I couldn’t feel the world around me anymore. It seemed like everything and everyone was moving very slowly. The entire room was spinning very slowly around me. I was feeling giddy inside my head. The whole of my pussy was overflowing with sticky liquid. It was a strange feeling. The deeper Charles probed inside my honey pot with his finger, the crazier I got. I couldn’t even speak.  I simply stayed the way I was, my hands covering my face. And then, slowly, I felt Charles’ dick enter inside me. At that moment, I suddenly stopped breathing. I wanted to speak but my voice choked. At this point, Charles stopped. He was no longer pushing his ‘thing’ inside me. Something held him from going further. The sweet-bitter feeling I was experiencing was halted. Then, I remembered. I was a virgin. He had to break me first. That was when I opened my eyes slightly.

“Rosie, are you…are you still a virgin?” Charles asked, a bewildered look on his face.

Slowly, I nodded. That was all I could do. I had lost the voice to speak.

“Are you serious? A pretty girl like you in SS2?” He bent over me and kissed me deeply. “You’re amazing,” he whispered into my ears. Then, he pushed his dick further inside me and a blinding explosion went off inside my head. I felt a sharp pain. Everywhere became silent. If a pin dropped at that moment, you could hear it. The world around us was no longer moving slowly, it had stopped moving completely! Now, there was just me and Charles. Just the two of us, all alone by ourselves. As he went slowly in and out of me, I felt my whole body go on fire. It was the most beautiful feeling I had ever felt. Charles was big and strong inside me. He took my legs and wrapped them round his naked waist as he pumped deeper and deeper into me. He was turning my entire tummy inside out. The feeling was a strange one. Bitter-sweet was the best way to describe it. I dug my hands into Charles back and held him tightly as he navigated in and out of my honey pot. My body was trembling all over. Charles too was sweating as he jerked his way into and outside of me. Then, he held my naked bumbum and held it firmly in his hands as he pushed further and further inside me.

READ ALSO: ASK DR LOVE: HELP! MY MAN CAN’T GET HIS THING UP!

Rosie’s Diary: The Big One Is Coming! was last modified: August 12th, 2020 by City People

How to Tell if There’s Serious Chemistry...

3 People to Discuss Your Sex Life...

How The Power Of Your Words Could...