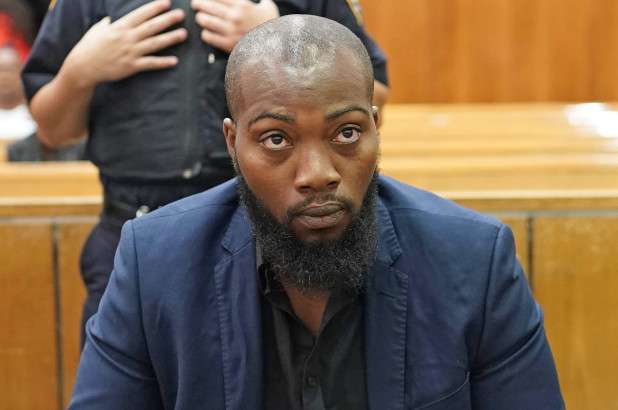 This scam story you about to read is slightly different from others as it supposedly has a royal connection.

According to the New York Times article published on Thursday, July 26,2018, Osmond Eweka, who is believed from the Benin royal family, and his associate Kamel McKay have been indicted on charges that they swindled people in search for employment to the tune of more than $54,000. The charges were announced on Thursday, July 26, 2018, by Cyrus R. Vance Jr.

One of Eweka’s lawyers denied the charges. “The reality is that Mr Eweka provided honest services to many satisfied clients,” he said in court. Eweka has pleaded not guilty to the charges.

playOsmond Eweka leaving the court with his attorney on Thursday, July 26, 2018

The prosecutors on the case believe he is guilty of the charges. According to them, Eweka rented an office in the Empire State Building in New York. The office was for an allegedly fake job-placement outfit called Stamford Consulting Firm, L.L.C.

The consulting firm located job seekers via a website Indeed.com. According to the prosecutors, a woman who has not been identified brought them to the office. The trick was to lure them with the opportunity of a job interview.

When in the office, the applicants were told to pay a fee for licensing and training if they got hired.

According to the report by the New York Times, Eweka introduced himself as Mr Sean Jacksonto the applicants. He boasted to have connections with employers in the city of New York. Now when hired, these applicants pay anything from $289 to $600. The higher you pay the greater your chances said the prosecutors.

The applicants were then told to return to Eweka’s office a few days later and sent to the Fire Department headquarters in Brooklyn for a fire guard license.

playOsmond Eweka has denied the charges made against him

After doing this “Mr. Eweka advised the victims to wait for a call from a job-placement coordinator” reported the New York Times.

Some people there was no call. Others received a call from a blocked number which sent them to fake addresses said, prosecutors. Some others reported showing up at legit offices but were told they had no relationship with Stamford Consulting Firm.

For over a month (May 18-June 12) Eweka and McKay were allegedly behind a similar operation at 521 Fifth Avenue in Manhattan. They used a company named Howard Consulting Group, L.L.C., according to the prosecutors.

Is Osmond Eweka a member of the Benin royal family?

The New York Times reached out to the royal of Benin to confirm if Osmond Eweka is a member.

“Mr Eweka’s precise position in the royal family of Benin remains unclear. Prosecutors said in court that he was a member of the family and had strong ties to Nigeria” said the New York Times.

“There is no way to verify who he is because it is a very large family,” said one of the reps of the royal family in New Jersey.

In 2016, the wedding photos of Osmond Eweka were featured in Bella Naija. In the article, he was identified as a Prince.