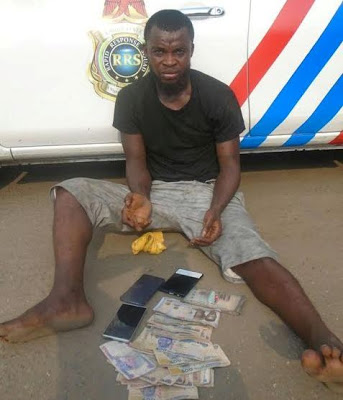 Ajibola Alao, 29, a member of a one-chance gang arrested by operatives of the Rapid Response Squad (RRS) of the Lagos State Police Command, has disclosed that his failure to heed his late mother’s advice not to steal other peoples’ sweat caused his arrest.

Alao was chased and arrested on Thursday afternoon during one of his routine operations in Oshodi after dispossessing their lone passenger of his two phones and the sum of N60,000:00. The suspect, in company of the driver and conductor of their operational bus, a Volkswagen Transporter, with registration number, APP 820 XE, had picked up their passenger, Asotie Benedict, at Ladipo with agreed plan to drop him at Oshodi Under Bridge.
But instead, Alao and his accomplices, armed with an alternative plan did not stop at Oshodi Under Bridge for him to alight. Citing the presence of LASTMA at that Bus Stop, they pretended they ascending the bridge towards Oshodi Oke, it was at this point they dispossessed Asotie of his two mobile phones (Blackberry Passport and Samsung) and his wallet containing N60,000:00 before forcing him to alight while the vehicle was in motion. According to Asotie, 24:

“After throwing me out in motion, they threw N100:00 fare beside me on the road, perhaps, for me to find my way back home. But, I didn’t give up, I chased the danfo bus…. Fortunately, I sighted RRS vehicle, Response 091 and I quickly alerted them and they chased the vehicle to a halt. They arrested Alao, who took all I had on me but the driver and the conductor abandoned their vehicle and escaped. All they took from me were found on him and some additional phones, which he disclosed to the police they took from previous victims of their one-chance operations.” 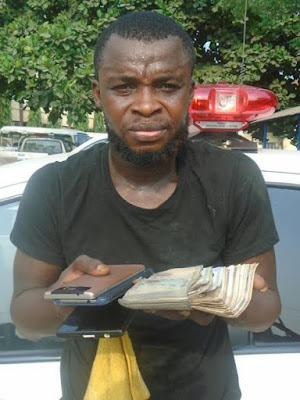 Alao, in his confessional statement, admitted been be part of a three man one-chance gang and that the two additional phones in his possession belonged to two previous victims of their operation in Oshodi. He stated:

“I have been in the business of one-chance since 2015. At a point, I stopped and began pickpocketing, joining buses to Sango, Agege, Oshodi, Apapa and disembarking whenever I had fleeced commuters of their phones and money…. At a time, I was arrested in Mushin Olosa Police station. My mum, who was very ill and on admission in an hospital at that time was brought to see me in a chattered car in detention…. She pleaded with the officers and secured my bail. She warned me repeatedly never to take other peoples’ sweat.”

She told me that if I have been using other peoples’ sweat to foot her hospital bills, I should stop it forthwith. She insisted that if I want to live long, I should stop stealing from people. She added that the consequences would be too severe for me if I go back again. Few weeks after the incident, she died,” he disclosed.

“I did it then because I needed N140, 000 to pay my house rent. At this time, I got more than that from a week’s operation but I didn’t stop then. Now, I went back into it to help raise funds for my siblings so that they won’t follow the same path…. I am the first child and the breadwinner of the family. Since the death of my mother, I have been taking care of my brothers. That was my promise to my mum before her death…. Most of my colleagues in the business were arrested by RRS last year. Few ones who were not arrested relocated to other states.”

Confirming the development, the State’s Police Public Relations Officer, Superintendent of Police, SP. Dolapo Badmos, said that the Command will not rest on its oars in nipping in the bud criminal activities in the state. 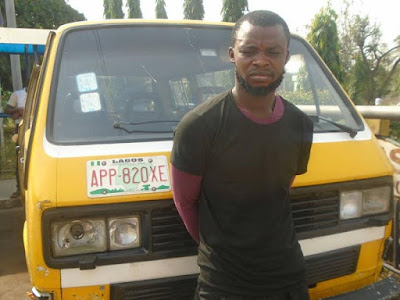 The suspect has been transferred to the State Criminal Investigation Department (SCID), Yaba, for further investigation
RRS arrest member of a one-chance gang who robbed and threw victim out of moving vehicle was last modified: February 5th, 2017 by Reporter